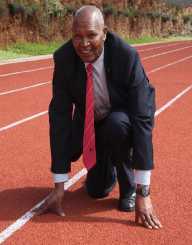 Kip Keino was born 17th January 1940. He was born in Kipsamo, Nandi, Rift Valley, in Kenya. Keino was raised by his aunt when his parents died in his very early years.

After his schooling, Keino enlisted in the Kenya Police Force.

Kip Keino debuted internationally at the 1962 Commonwealth Games held in Perth, Australia. He competed in the three-mile run, but he finished out of medal contention. Although he improved at the 1964 Summer Olympics, he still missed out on a medal when he came fifth in the 5000 meters. In 1965, Keino took the world record for the 3000 meters. He took part in the first All-Africa Games and won two gold medals for the 1500 m and 5000 m. Later in 1965, he took the world record for the 5000 m. Keino’s dominance continued when he won two gold medals at the 1966 Commonwealth Games for the one-mile run and the three-mile run.

In 1968, he won gold for the 1500 m at the 1968 Summer Olympics and silver for the 5000 m. At the Commonwealth Games in 1970, he won the 1500 m and took bronze in the 5000 m. In 1972 at the Summer Olympics, Keino won gold in the 3000m steeplechase, and silver in the 1500 m race. His running career spanned ten years, with spectacular results. At the Olympic Games, he won two gold and two silver medals. At the Commonwealth Games, he won three gold medals and one bronze medal. At the All-African Games, he won two gold medals and one silver medal.

Kip Keino was Chairman of the Kenyan Olympic Committee until September 2017. He led the way for his country on the international athletic stage, and he was the first of what has become many successful runners, both middle and long distance, from Kenya.

2012:   Inducted into the International Association of Athletics Federations Hall of Fame

2012:   Awarded freedom of the city by Bristol City Council (the first to do so since Sir Winston Churchill)

2016:   Awarded the first Olympic Laurel for outstanding service to the Olympic movement

Kip Keino married Phyllis Keino. They have a son, Martin, who is a talented athlete in his own right. The couple live on a farm and run the Lewa Children’s Home for orphans.