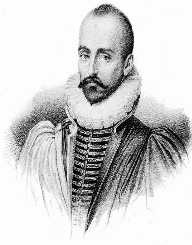 Michel de Montaigne grew up in an erudite household with his father insisting that initially his son is taught only in Latin by tutors at home. When he was six, he became a pupil at the College de Guyenne, Bordeaux.

Michel de Montaigne worked as a magistrate in the Cour des Aides de Périgueux which dealt with taxation matters from around 1557. He also worked in the Bordeaux Parlement, part of the court of justice. It was around this time that he met Etienne La Boétie and formed a close friendship with him until Boétie died in 1563. The death of his friend was his inspiration of one of his later essays entitled Of Friendship.

A French translation of Natural Theology by Raymond Sebond published in 1569 was his first book.

His father died in 1570 and Montaigne inherited his father’s title as well as becoming steward of his estate. A fact his mother was said to have resented as she had expected to be in charge of her husband’s demise.

Michel de Montaigne retired in 1571 and took up residence at the castle of Montaigne where he concentrated on his writing and research. During this time he wrote the first two books of his essays which were published in 1850. After the publications of the Essays, he visited Italy, Germany, and Switzerland, writing his Journal de Voyage to document what he saw and experienced. (This was never intended for publication in his lifetime and was only published in 1774).

In 1581 he was appointed the Mayor of Bordeaux by King Henry III, a position he held until 1585. His role as mayor meant acting as a mediator between Catholic and Protestant tensions in Bordeaux, and he was also mayor when a third of the population was wiped out by the plague which swept through the country.

Michel de Montaigne was awarded the Order of Saint-Michel.

Michel de Montaigne married Françoise de la Chassaigne, and the couple had six children together. Only one of their children survived infancy.

He was appointed as Gentleman of the King’s Ordinary Chamber in 1571.

Michel de Montaigne died at the age of fifty-nine in 1592. The cause of death was quinsy, a complication of tonsillitis.

Michel de Montaigne was born into a Roman Catholic family, and although some family members converted to Protestantism, he remained a Catholic.

Michel de Montaigne is credited with his development of the essay and other literary innovations. He is considered one of the most important philosophers of the French Renaissance.

Suffered from kidney stones and used to travel to spas to find pain relief. His father had suffered from a similar ailment.