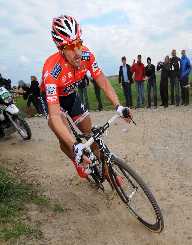 Fabian Cancellara was born on March 18, 1981 in Wohlen bei Bern, Switzerland. He began cycling when he was 13 years old and immediately fell in love with the sport. During his youth, he also played football and excelled at cross-country skiing. His cycling skills were impressive at an early age, and Cancellara dominated the Swiss junior competitions. In 1998 and 1999 he won the junior World Time Trial Championships.

In 2000, Fabian Cancellara placed second at the U-23 trial championships and turned professional with the Mapei-Quick-Step team. His first professional victory was at the Tour of Rhodes, where he won the overall general classification. During 2001 and 2002, Cancellara won many individual time trials and eleven victories for his team. In 2002, the Mapei-Quick-Step team folded, and Cancellara joined the FassaBortolo team. His first victory for the team was at the Tour Mediterranean. The same year, he participated in his first classic at the Tour of Flanders, finishing at 73rd place.

After the 2005 season, his team FassaBortolo disbanded, and Cancellara signed with Team CSC. His first victory with the team was the individual time trial at the Tirreno-Adriatico. He also finished sixth at the Tour of Flanders. His first ever classic victory was at the 2006 Paris-Roubaix. Despite his success over the season, he was not selected for Tour de France.

The 2007 season began with no major victories for Fabian Cancellara, however, by June he picked up and won the opening time trial at the Tour de Suisse. Later that year, he won the prologue of the Tour de France in London. In September, Cancellara competed at the Road World Championships and won the time trial.

Fabian Cancellara began his 2008 season with winning the Tour of California. He also finished second at the Paris-Roubaix. This year he joined his team at the Tour de France and helped his teammate Carlos Sastre to win the tour. Cancellara competed at the Olympic Road Race in Beijing and came in third place.

However, when Davide Rebellin, who came in second, tested positive for doping, Cancellara was promoted to second place. In 2009 season, Cancellara won the opening stage of Tour de France and competed at the Road World Championships, where he won his third world title for time trial discipline.

In 2010, Cancellara started with winning the Tour of Oman and went on to win the Tour of Flanders. He participated in the Tour of California in preparation for Tour de France. His next victory was at the Tour de Suisse. This year, he once again defended his time trial title at the Road World Championships in Melbourne. After the 2010 season, Cancellara joined the Leopard Trek team.

After his major success in the 2010 season, the 2011 season did not go as well for him. However, Fabian Cancellara won the first stage of Tour de Luxembourg and won the Swiss National Road Race. Cancellara also participated at the Road World Championships, however, finished third.

He began the 2012 season strongly, but later on, gained several injuries. During the Tour of Flanders, he crashed and suffered a collarbone fracture. After recovering, he raced in Tour de Suisse and Tour de France. During the Olympic Games road race, he took a bad turn and crushed on his shoulder. Despite his injury, Cancellara finished the race and was sent to a hospital immediately after crossing the finish line.

During Tour de France, he was involved in a massive crash in the third stage of the race and suffered two transverse process fractures in his lower back vertebrae. After the injury-driven 2015 season, Cancellara started 2016 with a win of a part of Vuelta a Mallorca. He won his third Olympic medal in a time trial at the Rio de Janeiro Olympic Games. His last professional race was the Japan Cup.