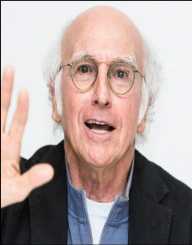 Lawrence Gene David was born 2nd July 1947, to Morty and Rose David. He was born in Brooklyn, New York, United States. His father was a manufacturer of men’s clothing. David had one sibling, an older brother.

He attended Sheepshead Bay High School, and after graduating, went to the University of Maryland. He graduated with a Bachelor’s Degree in History.

Larry David tried to eke out a career as a stand-up comedian but worked various other “day jobs” to pay the bills. In the early 1970s, he also started attending acting classes in Manhattan.

He debuted with his stand-up comedy routine in 1974 at Folk City in Greenwich Village.

Over the next few years, from 1979 to 1985, David took work as a scriptwriter and actor. He worked for the American Broadcasting Company (ABC) on one of their late night comedy shows, and also worked with NBC for Saturday Night Live.

In 1985, he resumed his stand-up comedy routines again. In 1987 he wrote a script for a television movie called Norman’s Corner, and also wrote for The Gary Shandling Show.

Between 1989 and 2012, Larry David continued to write and act. He also made guest appearances in television shows such as Entourage and The Marriage Ref.

In 1989, Larry David partnered with a fellow comedian, Jerry Seinfeld, to create a pilot for NBC. It was called The Seinfeld Chronicles and would become the basis for Seinfeld. Seinfeld went on to become one of the most successful television shows of all time.

Larry David drew on real life, creating Kramer’s character from a neighbor that lived across the hall from him in earlier years in his Manhattan apartment block. The character of George Costanza was based on David himself.

After seven seasons,  Larry David departed from the series but left on good terms, and returned two years later, to write the finale for the series in 1998.

Larry David  wrote 62 of the Seinfeld episodes. David earned approximately $250 million (USD) from the syndication of the show, just in 1998 alone. Although the amount decreases each year, the payments are still in the tens of millions of dollars annually for David.

He was nominated 19 times for an Emmy award and won twice – once for best comedy, and one for writing.

After Seinfeld, Larry David went to the HBO television channel with his show, Curb Your Enthusiasm. The shows developed a cult following and received critical acclaim. It was nominated for 30 Primetime Emmy Awards, although it only had one awarded.

He also wrote and starred in a production called Fish in the Dark, which played on Broadway. The play ran from March to August in 2015, and had advance sales of $13.5 million, breaking records for a Broadway show.

Between 1983 and 2013, David acted in eight movies, and also wrote two of them, and directed one.

From 1980 to the present, Larry David has been involved in approximately 17 shows on television, most of them as a writer, sometimes acting as well. This, of course, includes Seinfeld from 1989 to 1998, and Curb Your Enthusiasm from 2000 to the present.

He only had the one theatre production, Fish in the Dark.

Larry David  was nominated for many Emmy Awards, as were the shows he helped create.

1993:   Won the Emmy for Outstanding Writing for a Comedy Series (Seinfeld, episode, The Contest)

Larry David  married Laurie Lennard in 1993. They had two daughters, but later divorced amicably, in 2007.