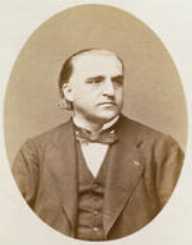 Jean-Martin Charcot was born on November 9, 1825, in Paris, France.

As a child, Jean-Martin Charcot love science. When he was a young adult, he went to college to study medicine. He eventually graduated with a medical degree in 1853.

In 1853, Jean-Martin Charcot began working at the Salpetriere Hospital. He started his career here as a junior intern, but through compelling research and hard work, he quickly worked his way up the ranks. One of the many things he researched while working at this hospital was the difference between gout and rheumatism.

In 1856, Jean-Martin Charcot was hired at the Bureau Central of the Paris Hospital. He worked here while also continue working at the Salpetriere Hospital.

In 1862, Jean-Martin Charcot was promoted to the post of the senior physician within the Salpetriere Hospital. Around this same time, he also began working at Paris University as a medical teacher. At the same time, he also continued his research. He was primarily focused on multiple sclerosis.

Later on in his career, he continued his research, this time focusing on disorders and illnesses of the brain and problems of the head and face. One of the things he discovered while studying these subjects was what would later be called Charcot-Marie Tooth Disease (discovered with Pierre Marie)

Around 1868, Jean-Martin Charcot began research on Parkinson’s Disease. He discovered that the disease is related to the nervous system. However, he was not able to find a cure for the disease.

In the 1870’s, Jean-Martin Charcot moved his focus of research was on studying epidemic diseases, primarily for smallpox and typhoid. However, the vaccine for smallpox was made by Edward Jenner in 1796, and the typhoid was created by Almroth Edward Wright in 1896.

In 1872, Jean-Martin Charcot was promoted to Professor of Diseases of the Nervous System.

In 1882, he opened a Neurological Clinic within Salpetriere Hospital. Here, he helped patients who had mental illnesses and other similar problems. One of the main mental illnesses he helped people with was what was then known as “hysteria.” This mental illness is now broken down into several other types. Since Jean-Martin Charcot studied both the brain and the body, he thought hysteria was related to weak nerves. By curing the nerves, he might be able to cure hysteria.

While here, he also began researching hypnosis and its possible benefits. He used hypnosis to treat patients, but he was convinced that it would not be able to heal them fully.  However, he did not use this in his practice for long before using other techniques instead, as he thought hypnosis was not as useful as other techniques.

Some of the other diseases and illnesses he researched during his long career are listed below.

Jean-Martin Charcot married Augustine Durvis in 1862. Together, the couple had two children.

Jean-Martin Charcot died on August 16, 1893, in Lac des Settons, France. The cause of his death was complications due to heart disease. He was 67 years old when he passed away.