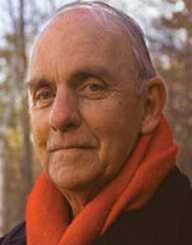 Carl Frederick Buechner is an American ordained Presbyterian minister, writer, and a theologian. Born on July 11, 1926, he has published more than 30 books. Buechner writes on a variety of topics and genres including sermons, fictions, essays, and autobiography. The well-acclaimed author has got his works translated into several languages across the globe. Buechner came to fame with his maiden book A Long Day’s Dying published in 1950. His other major works include, The Book of Bebb, Listening to Your Life: Daily Meditations with Frederick Buechner, 1992; Telling Secrets (1991), and The Eyes of the Heart: Memoirs of the Lost and Found (1999).

His religious writings were critically praised as it usually met the inspirational needs of readers. He has won several awards and honors for his writings including the Christianity and Literature Belles Lettres Prize, O. Henry Award, and the Rosenthal Award. Institutions like Virginia Theological Seminary and Yale University has also given him honorary degrees.

Carl Frederick Buechner was born on July 11, 1926, in New York to Katherine Kuhn and Carl Frederick Buechner Sr as the eldest son of his parents. His childhood days were full of traveling as his father searched for work. This continued until he was about 14 and this came with him attending different schools. In 1936, his father committed suicide by carbon monoxide poisoning with reasons of being a failure. After the incidence, they moved to Bermuda, where they lived until the Second World War when Americans were evacuated from the area. Buechner recounts his stay at Bermuda to what he terms as "the blessed relief of coming out of the dark and unmentionable sadness of my father's life and death into fragrance and greenness and light."

Buechner graduated from the Lawrenceville School in Lawrenceville, New Jersey in 1943. While there he met James Merrill, a future poet, and Pulitzer Prize winner and their friendship, accompanied with some form of rivalry inspired both to take on writing as a profession. After his high school education, he enrolled at the Princeton University, but as service demanded, he was drafted into the Army during the Second World War from 1944 to 1946. After he was discharged, he continued his studies and graduated in 1948 with a degree in English.

After his graduation, Buechner taught creative writing at Lawrenceville School. While at the university, Buecher was engaged in poetry writings and that gained him the Irene Glascock Prize for poetry. This was the period he also started work on his debut novel A Long Day’s Dying, to be published in 1950. The book was a huge success commercially and was highly praised shooting him to an instant fame. He was not able to maintain the status achieved by A Long Day’s Dying as his second novel, The Season’s Difference released in 1952 was a failure. To concentrate solely on his writing career, Buechner left for New York abandoning his teaching job at Lawrenceville. While there, he found a lecturing job at the New York University and came out with his short story, The Tiger, which was published in The New Yorker. Just like his first publication, it was well received and critically acclaimed.

Buechner, theologian career was informed by a sermon of George Buttrick at the Madison Presbyterian Church where he attended church. It sermon which was about the inward coronation of Christ had a great impact of Buechner that in 1954, he entered the Union Theological Seminary. He learned under astute theologians like Reinhold Niebuhr, James Muilenberg and Paul Tillich who helped him cured his curiosity about Jesus Christ and the foundation of the Church. His decision to enter the Seminary came as a surprise to people who were close to him. He took a year break from the seminary from 1955 to 1956 to continue with his writing career.

During his break and subsequent marriage, he worked on his third novel, The Return of Ansel Gibbs. He later returned to the Seminary and to complete his studies and was awarded a Bachelor of Divinity. His ordination on June 1, 1958, was very special because he received it at the Madison Presbyterian Church where the sermon of George Buttrick changed his life. He was however ordained without pastoral charge.

After his ordination, he has invited an invitation from Robert Russell Wisk for a position in the Philip Exeter Academy. Buechner was to introduce a new full-time religion department in the Academy. As a teacher, he picked up the opportunity and moved to Exeter in September 1958. Aside from his core mandate at the Academy, he also taught at the Religion and English departments as well as became the school's chaplain and minister. With his undying interest in writing, Buechner took a sabbatical leave from 1963 to 1964, during which he worked on his fourth book, The Final Beast, released in 1965. That was the first time he infused religious stance into his book writing.

Buechner was successful at Exeter, and within his nine years there, he was able to establish the religious department and left the school in the summer of 1967. His next book was The Entrance to Porlock which according to him was difficult to write without the structure of school life around him. Around this time, he received an invitation from the chaplain of Harvard Charles Prince, to give the Nobel Lectures series in winter of 1969 and that was when he developed the title The Alphabet of Grace. He juxtaposes the everyday life event "as the alphabet through which God, of his grace, spells out his words, his meaning, to us and that served as an inspiration to complete his book, The Entrance of Porlock.

Buechner next book was The Book of Bebb in published from 1972 to1977 in series. The book was very successful and gained him wider influence and the first series Lion Country was a finalist for the National Book Award. With the success achieved with the book, he went on to publish his next work Godric in 1980. The book also achieved its intended purpose and was nominated for a Pulitzer Prize. He went on to publish the book Brendan in 1987, which won him the Christianity and Literature Belles Lettres Prize that same year.

Recounting his father's suicide and the trauma it came it and the relief he had when he moved to Bermuda in his early years, Buechner published the book Telling Secrets. In the book, he described the living in Bermuda as "the blessed relief of coming out of the dark and unmentionable sadness of my father's life and death into fragrance and greenness and light" and also a place healing could like none other. His other works include The Storm, The Eye of the Heart, The Christmas Tide: A Story, 2005

Frederick Buechner is married to Judith Buechner in 1956 by James Muilenberg in Montclair. After their marriage, the couple spent four months touring Europe. The couple had three daughters.

Buechner has received awards like the Irene Glascock Prize for Poetry, 1948, O. Henry Award for The Tiger, 1955, Rosenthal Award for the Return of Ansel Gibbs, 1959 and Christianity and Literature Belles Letters Prize in 1987. He has received an honorary doctorate from institutions like Virginia Theological Seminary, King College, The University of South and the Yale University among others.