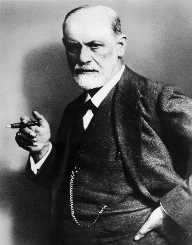 Sigmund Freud (born Sigismund Schlomo Freud) was born on May 6, 1856, in the Moravian town of Freiburg, Austro-Hungarian Empire (Now the Czech Republic). He was the oldest of 8 children in his family. His father Jakob was a wool merchant and already had 2 children from his previous marriage. Freud’s mother was Jakob’s third wife.

The family was struggling financially and in 1850, they moved to Leipzig and the following year to Vienna. There Freud entered the prominent Leopoldstädter Kommunal-Realgymnasium. He was an outstanding student and graduated in 1873 with honors. Freud was proficient in German, French, Italian, Hebrew, Spanish, English, Latin and Greek. When he was 17 years old, Freud entered University of Vienna. He was planning to study law, but instead joined the medical faculty. In 1881, he graduated with MD.

After graduating from University of Vienna, Sigmund Freud started working at the Vienna General Hospital. He was researching cerebral anatomy and in 1884 published a paper on palliative effects of cocaine. He also worked on aphasia research, which formed a basis for his first book: On the Aphasias: a Critical Study. He worked in the various departments of the hospital, including Theodor Maynert’s psychiatric clinic.

In 1886, Sigmund Freud resigned from the hospital post and set up a private practice designated to treating nervous disorders. Also in that year, he married Martha Bernays with whom he had six children.

Freud became more and more interested in psychiatry. He admired his tutor Brentano, who was known for his theories of perception and introspection. Brentano introduced Freud to the concept of existence of the unconscious mind. Freud also read the works of Nietzsche and Shakespeare.

In 1885 Sigmund Freud went to Paris on a fellowship to conduct scientific research on hypnosis. This was a major turning point in his career, since Freud began to focus on medical psychopathology, turning away from neurological research. Freud began using hypnosis in his clinical work, adopting his own approach.

Freud later concluded that encouraging his patients to talk more freely was more effective than hypnosis. He also found that patient’s dreams can be analyzed to reveal the structure of the unconscious mind. By 1896, Freud began using the term psychoanalysis to refer to his method.

During his time Sigmund Freud was also experiencing symptoms he described as neurasthenia. He was depressed, had irregular heartbeat and began psychoanalyzing himself. Freud linked these feelings to early childhood abuse, but later transferred the theory of infantile sexual trauma as the origin of all neurosis to a new theory of the Oedipus complex.

In 1899, he published The Interpretation of Dreams. He also published works for more general readership called The Psychopathology of Everyday Life and Jokes and their Relation to the Unconscious. In his book Three Essays on the Theory of Sexuality, Freud elaborates the theory of infantile sexuality and what drives the formation of sexual identity.

Since mid-1880s, Sigmund Freud worked as a docent in Vienna University. His work drew attention to several other professors, and they began to meet at his apartment every Wednesday afternoon to discuss issues on psychology and neuropathology. The group was called the Wednesday Psychological Society. By 1906, the group already had sixteen members.

In 1908, the group’s first official meeting took place, and later was deemed as the first International Psychoanalytic Congress. After the congress, a journal for psychoanalysis and psychopathology was launched. The following year, International Association of Psychoanalysts were put in place and Jung was elected its first president.

Freud often used pseudonyms in his patient case histories. His patients included several prominent public figures, such as Anna von Lieben, Ida Bauer, Ernst Lanzer and may others. He was also consulted by Princess Marie Bonaparte and Edith Banfield Jackson.

Sigmund Freud began smoking tobacco when he was 24 years old, and believed that smoking enhanced his capacity to work. Despite warnings from his colleagues about the health risks of smoking, Freud remained a smoker. In 1923, he discovered a benign growth in his mouth, leukoplakia. Freud kept it secret, but later consulted a dermatologist. He was advised to quit smoking, but the seriousness of the growth was minimized. The growth was excised, but his doctor did not disclose to Freud that it was cancer, fearing that he might wish to commit suicide.

By 1939, the cancer was causing Freud severe pain and was already inoperable. His condition got very bad and in September 22, his doctor administered doses of morphine that resulted in Freud’s death.