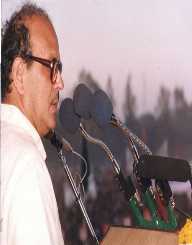 Vishwanath Pratap Singh was a political leader from India who became their eighth prime minister.

Vishwanath Pratap Singh is renowned for being extremely committed to the service of the people and always had a willingness to sacrifice office. Singh is accredited to significant improvements of India’s lower Castles when he was prime minister. With a natural sense of determination, sheer conviction and judgment, Singh slowly climbed up the political ladder to become one of the most respected politicians in the history of India.

Vishwanath Pratap Singh served in a variety of important positions in the cabinet and later became a defense minister. However, Singh resigned from the positions after having differences regarding decision making with Rajiv Gandhi, which also caused him to resign from the party. Singh later united a couple of small parties to form a coalition that emerged victors during the 1989 elections.  Singh served for a short while but is widely remembered.

Vishwanath Pratap Singh was born on 25th June 1931. His family was called `Rajibut Gahawar Zamindar.’ Singh was adopted when he was five years old with a Manda ruler named Raja Bahadur. Singh went to Colonel Brown Cambridge School in Dehra Dun for his early formal studies. Singh later joined Allahabad and Pune Universities for his college education. Singh was a leader from these early days whereby he became the student’s union head at Udai Pratap College. Also, he later served as the deputy head of the students Union at Allahabad University.

In 1969, Vishwanath Pratap Singh joined the Legislative assembly of Uttar Pradesh and was a member of the Congress party. In 1971, Singh was voted into the Lok Sabha as a member of parliament and was later selected for the position of deputy commerce minister, courtesy of Prime Minister Indira Gandhi in 1974. Also, Singh became the Union state minister of commerce, a position he held between November 1976 and March 1977. Singh was a man with great favor and in 1980, he was again appointed to a senior position of Chief Minister of Uttar Pradesh. He worked in this post for two years and during his reign, he always strived to deal with the dacoit issue facing individuals in south-west Uttar Pradesh.

In 1983, Vishwanath Pratap Singh became the Minister of commerce once again. At the same time, he served as Member of Parliament for Raiya Sabha and had additional responsibilities in the department of supply. The next year, Singh was voted in as the head of the Uttar Pradesh Congress committee. In 1984, the Union finance minister passed away, and Prime Minister Gandhi selected Singh as his replacement. Singh served in the position until 1987 when he was switched to the ministry of defense. During his reign, Singh came up with investigations on an arms procurement deal that portrayed the presence of fraud activities. However, this did not go well with the government, and Singh resigned from the cabinet, and subsequently the government and the Congress party.

Hence, Vishwanath Pratap Singh came up with an opposition party called Jan Morcha. Singh then contested for the elections in Allahabad and was voted into the Lok Sabha.  He convinced a couple of small opposition parties to form a merger so that they could have a better opposing force. Examples of these parties were: Lok Dal, Janata Party, Congress and Jan Morcha, and the merger was named Janata Dal (JD). The merger then led to the formation of a stronger opposing coalition called the National Front (NF). The NF contested during the upcoming elections, with rival parties, i.e., communist parties and BJP.

The NF emerged victors during the elections. Hence Vishwanath Pratap Singh became the prime minister on 2nd December 1989. The next year, the party maintained its dominance during the state legislative elections, whereby they gained a majority of seats in the Parliament. When in power, Singh supported a fixed quota reservation for employment opportunities in the public sector. This quota aimed to help individuals that were disadvantaged from the past, known as `Other backward classes.’ However, this led to strong opposition from non-OBC youth who felt neglected by the quota.

Later, the BJP was involved in a Rath Yatra whose objective was to support the construction of Ram Mandir at Ayodhya. As a result, Singh ordered the arrest of their leader L.K Advani, who in turn retaliated by withdrawing support. Hence, a vote of no confidence was cast against Singh in the Lok Sabha, and he had no choice but to resign. Singh gave up office on 7th November 1990. However, he continued with public work, involving in public lectures and creating awareness for social justice. Also, he loved painting and artistic work, especially painting.

Vishwanath Pratap Singh got married to Sita Kumari after an arranged marriage. They had two sons together, namely Ajay Singh and Abhal Singh.