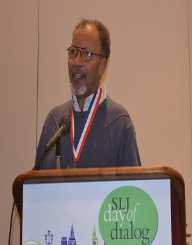 Walter Dean Myers was born on August 12th, 1937 in Martinsburg, West Virginia. He is a renowned American writer mostly for a young adult form of literature. Throughout his writing career, he wrote over 100 books which include both nonfiction and picture books that he specialized in. He awarded the Coretta Scott King Award for five times. Fallen Angels-1988, is a novel that is classified under the challenging literature in the United States. This is for the reason that the novel has excessive adult language and that it realistically depicts the Vietnam War.

Walter Dean Myers was born on August 12th, in 1937. His father was called George Myers whereas his mother went by the name Mary. His mother later passed away while giving birth to his younger sister. As a result of this unfortunate event, Myers had to be taken care of by his father’s first wife who was called Florence Dean. She shifted with him to Harlem in New York City where she would raise him. Considering the fact that Florence Dean took over as Myers foster parent, Myers took her name as a move that would honor her.

During the early stages of Dean Myers life, Myers was brought up in a community that believed in what the church said. Consequently, the church and the community protected Myers for the early part of his life. In spite of this, he did not perform well in school. In addition to this, he was also not fluent in his speech. This made him focus more on his writing. He majorly dwelled in poetry and short stories. Reading was one of his hobbies at the time he was young. When he was 17 years old, Myers joined the army.

After completing his term in the army, Walter Dean Myers worked as a laborer in one of the construction company. Things were not working out fine, and he recalled the advice he gained from his teacher that he should not quit writing no matter what occurred. This prompted him to begin writing after work during the night. His first writing featured the difficulties that he faced during his teen years.

Later on, in 1994, Myers was bestowed with Margaret Edwards Award by the American Library Association. This award was meant to appreciate his remarkable efforts in writing specifically for teens. In 2010, he became one of the nominees for the Hans Christian Andersen Award. In the period from 2012 to 2013, Myers was appointed by the Library of Congress to stand as the National Ambassador for Young People's Literature. This post was awarded to him with the main intention of creating awareness on the importance of education right from a youth stage to later stages in life.

Prior to the 60s, Walter Dean Myers wedded a kind-hearted lady named Joyce. The couple had two siblings together, i.e., Michael and Karen. With time, they separated, and Myers got married for the second time to Constance Brendel. Together they had a son named Christopher.