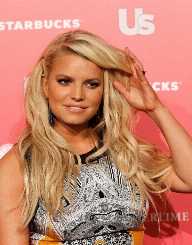 Jessica Ann Simpson was born 10th July 1980, to Joseph and Tina Simpson. She was born in Abilene, Texas, United States. Her father was a Baptist minister, and she had one sibling, a younger sister named Ashlee. Her parents married in 1978, and divorced in 2013.

As a youngster, Jessica Simpson sang in the church choir. As she got a little older, at the age of eleven, she began to dream of becoming a singer.

Jessica Simpson began her studies at J.J. Pearce High School, but she dropped out as her career began to take off.

When she was 12, Jessica Simpson auditioned for The Mickey Mouse Club. She got through to the semi-finals, but her competitors included Brittney Spears, Christina Aguilera, and Justin Timberlake. Simpson did not make the final cut for the show, and returned to performing in the church choir.

She was discovered soon after by a Christian music label named, Proclaim Records. She cut her debut album, Jessica, but the record label went bankrupt, so her record wasn’t released. Her record was sent to various other record companies, and it wasn’t too long before Jessica Simpson started getting auditions. The husband of Mariah Carey at the time, Tommy Mottola, was the head of Columbia Records. He signed her to the label, and she began work on her first album. Simpson quickly gave her father the job of being her manager, and her mother was her stylist.

Around this time, Spears and Aguilera were both starting to enjoy great success, basing their singing on sexuality. Mottola wanted to market Jessica Simpson as the opposite – as being “anti-sex appeal”. He felt this would increase sales, making Simpson more relatable to the listeners. Jessica Simpson's debut single, I Wanna Love You Forever, was released in 1999. The song went platinum for having sales in excess of one million copies in the United States.

Her debut album, Sweet Kisses, was released two months later. It eventually went double platinum, having sold more than two million copies in the U.S., and more than four million copies worldwide. Jessica Simpson continued to work in the studio, releasing further singles, and her second album, Irresistible, in May 2001. The album didn’t do as well as her first, and only went gold, for sales of 500,000 copies. Her third album was released in 2002, and then her father went to MTV with an idea for a reality television show starring Jessica Simpson and her husband, Nick Lachey. The result was the show, Newlyweds: Nick and Jessica. The show premiered in August 2003, and became an instant success. It aired for three seasons, finishing in 2005.

released her third album, In This Skin, to coincide with the debut of her television show, but the album didn’t do very well. She did, however, release a second single from the album called With You, which became a hit, and revitalized sales of the album. The album went on to sell over four million copies in the U.S. alone. Jessica Simpson started to branch out in business, and in conjunction with Randi Shinder, she released Jessica Simpson Desserts by Jessica Simpson Cosmetics. The products were all edible. From June to October in 2004, Jessica Simpson toured. Her Reality Tour was a success, and she began to make guest appearances with her husband, on The Ashlee Simpson Show.

In November of the same year, she released her fourth album, which was a Christmas-themed album. Jessica Simpson  teamed up with Shinder again in February 2005 to launch Dessert Treats edible cosmetics, but both this and her previous edible cosmetic lines were cancelled as lawsuits were starting to be filed. In 2005, Jessica Simpson  released her own apparel line, The Jessica Simpson Collection. She initially partnered with the Tarrant Apparel Group. The clothing proved a great success, and by 2014 the company was reported to be earning one billion dollars in annual sales. Jessica Simpson also ventured into acting, and her film debut was as Daisy Duke in the 2005 release of The Dukes of Hazzard. The film grossed over $111 million worldwide. Jessica Simpson went back to the studio to work on her fifth album, but in early 2006 it was announced that she had left Columbia Records and had signed a deal with Epic Records.

Also in 2006, Jessica Simpson released a line of hair and beauty products with stylist, Ken Payes, on the Home Shopping Network. The rest of 2006 wasn’t so successful for Simpson. Her new album did not reach the success that her previous albums had, and neither did the singles that were released from it. Her next movie, Employee of the Month was released, also to negative reviews and criticism. After the breakdown of her marriage, Jessica Simpson  began dating Tony Romo in 2007. Romo was a quarterback for the Dallas Cowboys, but unfortunately his form hit a huge slump around the same time, and fans blamed Simpson. The pair ended their relationship in 2009.

Jessica Simpson ’s next two movies were once again forgettable, and received negative reactions. On a brighter note for Simpson, she released her first fragrance, Fancy, in 2008, through Parlux Fragrances. The scent was a commercial success for her. Jessica Simpson ’s next album was released in 2008, venturing into country music, but it was considered a failure when it came out. The fans didn’t like it at all. Over the next couple of years, Simpson released more albums, but they had no impact on the charts. Jessica Simpson announced her first pregnancy towards the end of 2011, and in 2012 she signed a multi-million-dollar contract with Weight Watchers to lose the weight she had gained during her pregnancy.

Jessica Simpson  went into a very productive period – she launched a maternity clothing range in 2012, her second fragrance, Vintage Bloom was released, and at the end of 2012, she reached a new agreement with Weight Watchers for her second pregnancy. In 2013, Jessica Simpson eleased a line of bedroom décor products, and in 2014, another fragrance was released. In 2015, Jessica Simpson  released her range of workout clothing, called, Warm Up. Between 2002 and 2008, Jessica Simpson  acted in six movies, and from 2002 to 2013, she was in 12 television shows.

Jessica Simpson married Nick Lachey in October 2002, but the couple divorced in 2005.

Jessica Simpson's  second marriage was to Eric Johnson, a retired footballer, in 2014. They had two children together.

Jessica Simpson has performed on various occasions for different charities:

2004: Divas Live 2004 benefit concert in support of the Save the Music Foundation

2006:   Donated a Chrysler minivan to the Elim orphanage in Nuevo Laredo

Jessica Simpson has performed in other concerts as well, and also works with the Make A Wish Foundation.