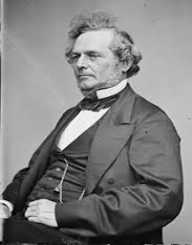 Richard March Hoe was the earliest innovator in the American printing industry. His invention of the rotary printing press machine revolutionized the industrial printing world.

Richard March Hoe was born in the family of Robert Hoe in New York on September 12, 1812. His father was an English mechanic immigrant from Leicester, England. Hoe had two other siblings Peter Smith and the youngest Robert Hoe II. Like many of the peers, he had a primary school education and moved to vocational apprenticeship.

His father co-founded a  manufacturing factory for printing press machine called R. Hoe and Company. Soon after finishing his primary education, Richard Hoe joined his father at the factory at the age of fifteen in 1827. He worked at the steam engine factory helping out with some minor mechanical adjustments. Hoe helped his father in the inclusion of the cylinder presses in the original plant. Though new to the American public, the printing system had been used in England for years.

In 1830, his father retired from active operational duties at the factory and later died in 1833. Richard March Hoe took over the daily operations of the factory. He managed to produce a better single cylinder printing machine. At the initial inception, Hoe printed 2,000 pages in a single hour. The American printing society praised him for his input but was still slow to implement his mechanical ingenuity.

His invention made an initial printing capacity of 8,000 pages per hour. Hoe had given the American printing world machinery that was fast in printing and easy to manage. His maiden client was the Philadelphia Public Ledger. He patented his new invention with the US authority in the late months of the year. His invention later became known as the Hoe Rotary press machine.

In 1865, Richard March Hoe improved on the 1847 printing machine. He managed to produce a printer that worked on a continuous roll of paper. In this new invention, Hoe still had a major problem. All his inventions only printed on one side of a roll of paper. In 1871, he made a revolutionary printing press. For the first time, he rolled out a printer that printed on both sides of a roll of paper. Hoe now printed 18,000 pages in a single hour. The New York Tribune became the first media printing house to use the machine in 1871. He created the Hoe Lightning Press machine. Newspapers were produced and distributed to the public within the hours of the early morning.

After attaining the breakthrough with his fast printing press machine, Richard March Hoe introduced other adjustments on the plant. He attached a newspaper folder that folded the printed sheets into two sheets presenting the final newspaper for the readers. Hoe had introduced the first complete and modern printing press machine in the US. The US citizens now got information in real time and helped form an informed decision on matters.

For the first time in US history, the citizens read about a presidential election in the media. In November 1876, the New York Sun timely reported the disputed presidential elections between Rutherford Hayes and Samuel Tilden. On November 8, 1876, the New York Sun newspaper edition broke records for selling over 220,000 copies in a single day. Richard Hoe opened his franchise office in London after the success in the US.

Richard March Hoe was married to Mary and had a family. The family lived on their fifty-three acre land in the Bronx, New York. He was a committed Freemason.

Richard March Hoe died in Europe on June 7, 1886, in Florence Italy aged 73. He was on a business trip in view to expand his commercial interests.

In April 2010, the New York State administration opened a public park in his honor. The park is modeled alongside a structure resembling the Hoe Rotary printer. The Hoe Avenue in New York adorns his name.

In 1902, one of his relations Robert Hoe published a book titled Short Story of the Printing Press. In the book, Robert Hoe explores the invention journey of his uncle, Richard Hoe.

He created a milestone in the rapid rise of the literacy level of American society with his invention of the printing press.