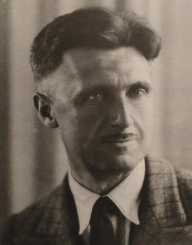 George Orwell’s father Richard Walmesley Blair worked in an opium department of the Civil Service Dept. His wife, Ida Mabel Blair, of French origin, grew up in Burma. The couple had three children.

Mr.Eric Arthur Blair or George Orwell was born on 25 June 1903 in Motihari (presently in Bihar). In later years, Eric changed his name to George Orwell. He continued this name as his pen name in all his writings. Eric had two sisters. They hailed from not too wealthy family.

Ida moved to England with two children, Orwell, and another child and cared for them. Young Orwell came in contact with another family and became friendly.

Ida, George’s mother, had desired that George Orwell is sent to a Public School for his education. They could not afford the cost of the fee unless he earned a scholarship. Orwell, at the age of five, attended a Convent School run by French nuns. Later Orwell moved to St. Cyprian School, where he got some financial assistance through the efforts of his maternal uncle and the headmaster of the school. He studied in this school for five years. Orwell was not happy during this period of stay.

A contemporary of Orwell in school days, Cyril Conolly, later became a writer and editor. Orwell spent some time at Willington in 1917 and as a King’s Schola rat Eton, till 1921. His academic performance was not satisfactory to earn him a scholarship for collegiate education.

The family decided to move to Burma in October 1922. George Orwell enlisted as a police officer and served in various parts of Burma. He acquired rich experiences of the conditions prevailing in Burma. His experiences were the basis for a novel and essays later. In 1927, Orwell returned to England and decided not to return to Burma but to take up writing as a career.

George Orwell returned to London. He made acquaintance with local friends and also met his tutor for advice on becoming a writer. A friend offered advice on his poetry and advised him to write what he knew. He traversed London for over five years and found a subject to write. He explored the poor parts of London and his experiences of the poor were recorded in an essay.

George moved to Paris, where he stayed with his aunt. She gave him moral support and financial help. He started writing novels in Paris and became a successful journalist. He published articles on unemployment, beggars in London, etc. in journals.

George Orwell fell ill in 1929 and was admitted to a hospital where medical students were given training. His experiences as a patient in the hospital formed the basis for an essay published in 1946. He had the misfortune of having lost all his belongings and had to do low level jobs. His experiences during this period were published as a book.

He returned to England, after over two years in Paris and stayed in his parents’ house for the next five years. Here Orwell taught a disabled child and three young brothers, one of whom became a distinguished academic. He continued publishing his writings here.

George Orwell even tried to go to prison for his drunken behavior to gain experiences in jail. His attempt was not successful.

In 1932, George Orwell accepted an assignment as a teacher in a high school for boys in London. He was also actively participated in the activities of a local church.

In 1933, he enrolled himself as a teacher in a school in Middlesex. Even here Orwell visited the villages. He became seriously ill and returned to Southwold to convalesce and did not return to teaching.

George Orwell joined as a part time worker in a Book store in Hampsted. His experiences were the basis for a Novel, “Keep the Aspidistra Flying” which was published in 1936. He devoted his time in acquiring the knowledge of working conditions of economically poor northern London.

In 1936, Orwell spent time in visiting the homes at Wigan to get an idea of how the people lived, their housing conditions and conducted an economic survey about their health care conditions.

George Orwell published a book, The Road to Wigan Pier in 1937. He was under surveillance for his research on this book from 1936. He gave a talk at Adelph Summer School, - An Outsider Sees the Distressed Area.

In 1939, Orwell’s health deteriorated, and he was advised to rest in a sanatorium. He wrote a book, “Coming Up for Air.” Orwell returned to England in1939. Orwell wanted to work during the World War II, but there was no response to his request for an assignment. However, his wife started working in London.

George Orwell was active in writing books, journals, reviews, films and so on. He also wrote his war time diary. Orwell created cultural programs during his service at BBC, and after resigning from BBC, he contributed articles to other News journals like “Observer,” “Turbine” and also wrote reviews of books.

He went to Europe for a short period and was in London for the General Election. He published his book: Animal Farm: A Fairy Story, in 1945. This book made him famous. Orwell continued his journalism career with “Turbine” for four years and published his best book “Nineteen Eighty-Four” in 1949.

The list of publications, Essays, reviews, and criticism are numerous, but only a few have been given here.

“Burmese Days” and two essays, “Hanging ” and “Shooting an Elephant” were based on his experiences as a police officer in Burma

“The Spike” and a book “Down and Out in Paris and London” were based on his experiences in poor classes of London.

“How the Poor Die” was an Essay on his experiences of staying in a hospital as a patient.

“Keep the Aspidistra Flying,” was based as a part time worker’s life in a bookshop.

George Orwell married Eileen D’Shaughnessy on 9th June 1936. Given his interest in military unrest, he left for Spain to take part in the Spanish Civil War. He lost his wife in the year 1945. He married again, Sonia Browell in 1949 while he was in the hospital. She looked after Orwell’s affairs and Orwell very well. Orwell adopted a child in 1941, and they named the baby as Richard Horatio Blair. His wife resigned to look after the family.

In 1947, George Orwell moved to the Island of Jura where he fell seriously sick, and he died in 1950.