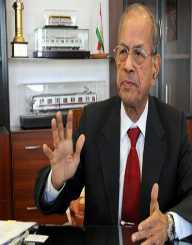 Elattuvalapil Sreedharan was born on June 12, 1932 in Pattambi, Palakkad district of Kerala, India. He was educated at the Basel Evangelical Mission Higher Secondary School. After acquiring basic education, he went to study at the Victoria College in Palghat. He continued his academic education at the Government Engineering College, Kakinada, Andhra Pradesh, receiving a degree in Civil Engineering.

After finishing his studies, E. Sreedharan worked as a lecturer in Civil engineering at the Government Polytechnic, Kozhikode. He then worked one year at the Bombay Port Trust as an apprentice. In 1953, Sreedharan joined the Indian Engineering Service and was assigned to be the Probationary Assistant Engineer in the Southern Railway.

E. Sreedharan rose to recognition by the government after a natural disaster occurred. In 1964, a cyclone washed away parts of the Pamban Bridge. The Railways set a six-month goal to repair the bridge, but Sreedharan’s boss wanted the work to be finished in just three months. Sreedharan was put in charge of the project to restore the bridge and finished the work in 46 days. For his astonishing achievement, he received the Railway Minister’s Award.

In 1970, E. Sreedharan was the deputy chief engineer. He was put in charge for implementation, planning, and design of Calcutta metro- the first metro in India. He completed this project with great success, founding the modern infrastructure of engineering in India. In 1975, he was removed from his post and joined the Cochin Shipyard. He took over the production of the company’s first ship MV Rani Padmini, finishing the project in two years.

In 1987, E. Sreedharan became the general manager of Western Railway. Two years later, he was promoted to the post of Member Engineering, Railway Board and Secretary to the Government of India. Although Sreedharan retired in 1990, the government continued to hire him and appointed him the CMD of Konkan Railway. Under his leadership, the difficult project with 93 tunnels in 82km length was built. The project also involved tunneling through soft soul. The project covered 760 km and had 150 bridges, and was considered a major achievement since it did not require extra costs or time overuse.

E. Sreedharan was also the managing director of Delhi Metro Rail Corporation in mid-1997. For his success in civil engineering, the media began to call him the Metro Man. For his achievements, Sreedharan received the Knight of the Legion of Honor award by the French government and the Padma Vibhushan by the Indian government. Sreedharan isolated the political influences from his work and focused on fast execution of them, which won him many contracts. He retired from service in 2011, serving 16 years for the Delhi metro.

E. Sreedharan was also the Principal Advisor for Kochi Metro Rail Project, Chief Advisor for the Lucknow Metro and has been advising the Jaipur Metro.

E. Sreedharan is married to Radha Sreedharan and has four children. His eldest son Ramesh is a vice-president at Tata Consultancy Services. His daughter Shanthi Menon runs a school in Bangalore.

At the time when E. Sreedharan took the post on the Kochi Metro project, his biography The Story of E.Sreedharan’s life was released. It was written by M.S. Asokan and became an immediate success in India.