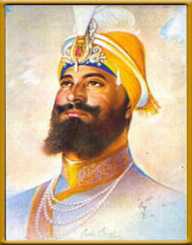 Guru Gobind Singh Ji was the 10th and last Guru of the Sikhs. He took the mantle after the execution of his father Guru TegBahadur when he was only nine years old. But with his great warrior skills and spiritual mind, he turned the Sikhs into a formidable force that not only protected commoners from Mughal oppression but also stopped forced religious conversions to a great extent.

Today Guru Gobind Singh Ji is remembered as the founder of the Khalsa – making Sikhs a warrior clan, the five K’s and as the author of the Guru Granth Sahib – the holy book of the Sikhs which was compiled by Guru Gobind Singh. In his dying moments, he proclaimed the book to be the next Guru for the Sikhs.

Guru Gobind Singh was born as GobindRai to Guru TegBahadur, the 9th Guru of the Sikhs & Mata Gujri, his wife. His birthplace is Patna, Bihar. His star sign was Capricorn. Gobind Rai was schooled mainly by his mother due to his father’s traveling.

Guru Gobind Singh learned Persian, Sanskrit, & more importantly martial arts – a skill that would aide him again and again in his numerous battles against the Mughal forces.

When GobindRai was only nine years old, his father Guru Teg Bahadur was assassinated by Aurangzeb, the Mughal king for refusing to convert to Islam.

As Guru Teg had nominated him the next guru of the Sikhs, he became their leader after the ritual on a Baisakhi.

Although Guru Gobind Singh was young, he was very mature for his age. And he understood that it was necessary to take up arms against oppression. He believed in Dharmyuddha. He propagated the idea of fighting for the right, for justice & not for revenge. Guru Gobind Singh founded the Khalsa, and the first five men who were willing to sacrifice their lives for the greater good were called his PanjPiyare.

Battles With The Mughal Army

Guru Gobind Singh Ji and the Khalsa fought 14 major battles and many minor battles with the Mughal army. The valiant Sikhs often defeated the huge armies of the Mughal generals despite being less in number. Some of the notable battles include the Battle of Bhagari, the Battle of Nadaun, Guler, Anandpur, Chamkaur&Muktsar.

The battle of Chamkaur is considered as one of the greatest battles in the human history where only 40 Sikhs fought against thousands of Mughals to protect their Guru’s life.  All of them succumbed, but they succeeded in helping Guru Ji escape.

Earlier, Guru Gobind Singh Ji who was traveling with 47 companions was assured a safe passage by the Mughals. As he was staying at a noble’s house, he was betrayed by them, and a huge army surrounded the 48 Sikhs.  40 of them fought valiantly on the frontlines so that Gobind Singh Ji could escape at night. Two of his sons died in this battle.

After escaping from Chamkaur, Guru Gobind Singh wrote a letter to Aurangzeb which is called Zafarnama or the ‘epistle of victory.’ He criticized Aurangzeb for being unethical &immoral  and not keeping his promise even after swearing an oath on the Quran.

Guru Gobind Singh predicted the fall of the Mughal Empire because of all the hypocrisy in their governance and even in warfare. But he praised Aurangzeb personally as a pious man and sought a meeting for a truce.

Aurangzeb at the time was also looking for peace and agreed in 1706 to meet the Guru. However, he died of his illness in 1707 before the meeting. As predicted by Guru Gobind Singh, soon the Mughal Empire was caught in internal wars of succession.

Mughal General Wazir Khan didn’t like the emperor Bahadur Shah’s association with Guru Gobind Singh, and he ordered two men Jamshed Khan and Wasil Beg to assassinate the Guru. They followed his group and one day when the Guru was meditating, Jamshed Khan stabbed him.

The Guru fought back and killed one of the assassins, while his guards killed the other. Although he received treatment, the wound below his heart was too deep and reopened. Sensing his end near, he proclaimed the Guru Granth Sahib to be the holy book for the Sikhs. He died on October 7, 1708, in Nanded.

Guru Gobind Singh had three wives – Mata Sahib Kaur, Mata Jito & Mata Sahib Devan. With his first wife, he had three sons, and his second wife bore him another. All four of his sons – Fateh Singh, Zorawar Singh, Jujhar Singh & Ajit Singh died well before him.