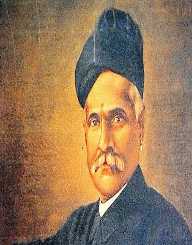 Raja Ravi Varma was born on April 29, 1848, in Kilimanoor, India. His parents were Umamba Thampuratti and Neelakandan Bhattathiripad. He also had three siblings: Goda Varma, Mangala Bayi, and Raja Varma.

As a child, Raja Ravi Varma showed a love for art. Even though he was young, he already had a talent for the discipline. However, his parents did not approve of all of the time he was spending on making art. Luckily for Varma, his uncle, Raja Ravi Varma, took Varma in to teach him art techniques. He knew how to do this since he was also an artist.

Later on, Varma’s uncle spoke with the King Ayilyam Thirunal, who also saw Varma’s talent and promise. The king then provided Raja Ravi Varma with art lessons. At the same time, he was also still training with his uncle.

When he was 14 years old, he moved away from his uncle and into the Kilimanoor Palace. Here, he was taught personally by Rama Swamy Naidu and encouraged by the king. While at the Palace, he learned how to make his own paints, how to paint in the western style and how to do some techniques used with oil paints.

Raja Ravi Varma’s artistic styling was unique, in part because he made many of his own paints and because he studied under several artists and did independent studies rather than just learning from one artist. He also didn’t stick to one or two topics. He painted most every topic he could! However, it should be noticed that a bulk of his commissioned art was for portraits. Some of his most famous paintings also show mythological people and religious figures.

Raja Ravi Varma began his professional painting career while still living at the Kilimanoor Palace. Here, he painting a portrait of the king and queen. Beginning around 1870, he started to paint portraits of other royals and rich members of the community. Word spread quickly about his wonderful painting skills and by 1873, he won the top prize in an art exhibition in Vienna. He also was invited to another exhibition halfway around the world in Chicago, USA, in 1893.

In 1894, Raja Ravi Varma opened a lithography shop called Ravi Varma Pictures Depot. Here, he printed reproductions of his paintings to sell. He ran this depot until 1901.

Some of his most famous paintings are listed below.

Lady in the Moonlight

Jatayu Attempting to Save Sita Devi from Ravana

Raja Ravi Varma was awarded the Kaiser-i-Hind Gold Medal in 1904.

Raja Ravi Varma married Pururuttathi Nal Bhageerathi. Together, the couple had five children. One of his sons, Rama Varma, also grew up to be an artist.

Several buildings, mostly schools, are named after him. One of the schools in this group includes Raja Ravi Marma High School.

The Raja Ravi Varma Puraskaram award for artists, given by the Government of Kerala, is named after him.