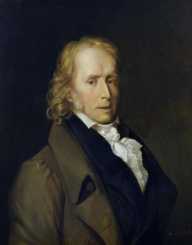 Immanuel Kant was born on April 22, 1724, in Russia. He later changed his name to Immanuel, which is pronounced the same way as his birth name, but just has the Hebrew spelling of the name. His parents were Regina and Johann Kant. He also had eight siblings, only three of which would live to see adulthood.

As a child and teenager, it was clear that Immanuel Kant was an exceptional student. He strictly followed his studies and always seemed to have his nose stuck in a book. As a youth, he studied at the Collegium Fridericianum. When he was 16, in 1740, he went on to attend the University of Konigsberg. While at school, he studied both mathematics and philosophy. He later spent most of his life focusing on the study of philosophy.

Immanuel Kant later left his studies in 1746, when his father died. He returned home to work. He mostly tutored others to make money to support his family.

Immanuel Kant made a living writing about his philosophical beliefs, which is part of the reason why his beliefs are so important when telling his life story. He is what is known as a transcendental idealist philosopher, which means that he believed that a person’s perspective on the world and what a person knows makes up what they see and get out of the world. A person’s ideas impact their reality, and that a person cannot know everything about the world because they just don’t have the power to do so. These ideas were not really thought of before Immanuel Kant wrote of them. Other philosophers, like Descartes (who believed that a mind could make up most everything with the senses with the mind being true and real) and Berkeley (who said there was a possibility that everything could be made up by the mind alone), had similar ideas. However, it was Immanuel Kant who coined the term transcendental idealism.

In his works, he often debated the notion of whether God existed or not, and if he did, to what extent he cared about humans and the Earth.

He also believed that the rules of time and space had an important impact on the way people were allowed to interpret the world around them. They could make up most things with their mind, but they could not change the laws of space and time.

For most of his career, Immanuel Kant studied and wrote. His publications are listed, in detail, in a separate category below.

In 1955, Immanuel Kant earned one of this first ‘real’ jobs as a university lecturer. As one might expect, he taught philosophy. He focused on teaching both the Greats, as well as his own ideas. In 1770, he was promoted at the University of Konigsberg to become both the professor of metaphysics (which he previously taught) and logic.

Immanuel Kant published his first work, Thought on the True Estimation of Living Forces, in 1949. This work was a philosophical one and would set the stage for his works to come. He published one of his first scientific works was published in 1755, called General History of Nature and the Theory of the Heavens. In this work, he published his ideas on how he thought the solar system was created. This work was more astronomical than religious or philosophical. Kant’s largest work, Critique of Pure Reason, was published in 1781. It was extremely complicated and not well-received by the general public. He later wrote Prolegomena to any Future Metaphysics, to try to explain his ideas in a way that others could more easily understand.

Groundwork of the Metaphysics of Morals was the title of Kant’s first real religious/moral philosophical work. This was published in 1785. Afterward, he published other moral works, like the Critique of Practical Reason.

The Critique of Judgement was written in 1790. It is widely regarded to be one of Kant’s most famous works. In the book, Immanuel Kant shares his opinions of the Copernican Revolution. The Copernican Revolution was not a war, as the name might suggestion, but instead a revolution of ideas. Before this time, it was thought that everything [in the solar system] revolved around the Earth, but after the revolution, it was thought that everything revolves around the sun, which is now what is widely believed today.

One of Kant’s last works, Piece of Religion within the Bounds of Bare Reason, was first published in 1792. The book was censored at first, so he instead separated the book into parts and published them through the University of Jena. He was in trouble with the government for being sneaky and doing this. Still, two years later, he published a second edition of the book. He was then legally banned from writing or talking about religion.

Some of his other works are listed below.

Attempt to Introduce the Concept of Negative Magnitudes into Philosophy

Observations on the Feeling of the Beautiful and Sublime

Answer to the Question: What is Enlightenment

Near the end of his life, Immanuel Kant’s memory began to fade, and he stopped writing. Immanuel Kant died on February 12, 1804. He was 79 years old when he passed away.