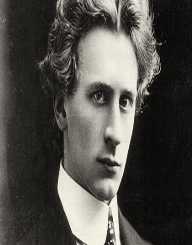 Percy Grainger was a composer and pianist known for deviating from standard ways of making music and involving a lot of experimental techniques into his compositions.  He was instrumental in reviving the British folk music – he was connected to it for all his life.

Percy Grainger was born in Australia on July 8, 1882.  His birthplace was Melbourne, and his star sign was cancer. His father John Grainger was a famous architect, but his mother Rose Annie Aldridge mainly influenced him. His parents separated when he was eight years old. After that, he was brought up by his mother who was very strict with his education. She arranged piano lessons for him at the early age of 10, and soon his interest in music began.

By age 12, Percy Grainger had begun doing concerts, and a series of successful ones prompted his mother to decide on shifting to Frankfurt, Germany so that Grainger could get a better education in music.

While in Frankfurt, Percy Grainger befriended Karl Klimsch who also had an interest in folk songs. With Klimsch motivating him, Percy began to explore and experiment with Nordic music and develop his style. Together with other students who had similar interests in music, Grainger formed the Frankfurt group. In 1900 his mother had a nervous breakdown, and Percy was left with no other option than to use his skills to provide for the family. He started giving piano lessons and also organized concerts to earn money to support both of them.

A year later Percy Grainger left his studies and shifted to London with his mother.

It was in England that Percy Grainger became famous and befriended many other famous musicians. He started out as a collector of folk songs.  Grainger started by collecting original versions of folk songs. He also developed a taste in the phonographs with which he used to record these songs.

While in England, Percy Grainger composed “Mock Morris,” “Shepherd’s Hey” and “Molly on the Shore” which went on to be some of his most famous songs. Soon he was recognized as one of the best pianists in the country. In 1914, the WWI started. Percy left England with his mother and went to America. He enlisted in the U.S. Army as a bandsman and composed “Country Gardens,” his most famous piece of work. In 1918, Grainger was awarded the citizenship of America.

After the WWI ended, Percy Grainger began to work full time as a pianist and drew thousands of people to his concerts. He became accomplished as a top pianist in America. He also started instructing in piano techniques and rescored his previous works. In the April of 1922, Grainger suffered a loss – that of his mother who took her own life out of depression by jumping off the roof. Grainger was on tour then. This also freed him from the possessiveness of his mother, and he started dating women romantically.

Percy Grainger kept composing more scores for a significant part of his career and declined any honorary degrees offered to him. At the dusk of his career, he stopped composing new music and focused more on teaching.

The WWII hurt his health and mind. Percy Grainger became disillusioned about his work and life and mostly led a secluded life except for his family. His health kept on deteriorating which hurt the volume of work he produced.

Percy Grainger was awarded many honorary degrees in his career, but he refused all of them.  He accepted the St. Olav medal from the King of Norway which he was awarded for promoting his friend Greig’s music.

Percy Grainger dated a few women but was only able to get into a series relationship after the death of his mother. He met Ella Strom in 1926 and married her in 1928.

Percy Grainger's battle with ill health came to an end on February 20, 1961. He died aged 78 in White Plains, USA.