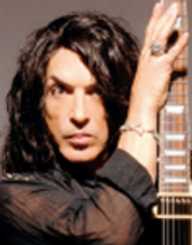 The world of music was once again blessed with another talented and vibrant singer, Stanley Bert Eisen best known as Paul Stanley as he made his first cry on January 20, 1952. Born in Manhattan, New York, United States, Stanley is also an actor, record producer, and songwriter.  He is best known for his role as a rhythm guitarist, singer, and co-writer of the rock band Kiss. He is a co-writer of several hit songs of Kiss and a former member of Wicked Lester a band he formed with colleague Simmons.

From a very humble beginning, Stanley is now a proud Hall of Famer and has made a mark in the rock music genre. Stanley has undoubtedly become one of the most famous rock artists in the world as he is ranked 18th in Hit Parader’s top 100 Metal Vocalist of All Time and 13th on Gibson.com Readers Poll for Top 25 Frontmen.

Paul Stanley is the second of two children and just two years younger than his elder sister Julie. He was born and nurtured in Manhattan. Born to a Jewish family, Stanley never practised that faith with reasons best known to him. Growing up, he was outstanding in artworks which he pursued at the high school level during his education at the High School of Music and Arts which he completed in 1970. Despite his skills and love for artworks, he had to abandon it and switch to music. The switch wasn’t strange because he got enthused with music during his childhood day because his parents were fans of classical music.

Despite his hearing impairment due to his congenital disability, microtia, Paul Stanley never stopped enjoying great tunes from Beethoven, his favorite band. He gradually fell in love with music as he continued to listen to the group and artist like Eddie Cochran, Dion, Little Richard, Jerry Lee Lewis, and Belmonts. He was taught how to play the guitar and had his first acoustic guitar at age 13. This made him even practised the more with tunes by the likes of Bob Dylan, The Byrds, and The Lovin’ Spoonful. All this while, he was listening to other great musicians to enable him to perfect his skills.

Paul Stanley did not have it all blooming during the start of his career, but with hard work and dedication, the sky became his limit despite his deformities. He started his career with a local band Rainbow, Uncle Joe and Post Way Baby Boom. With high aspiration Stanley and unending desire to reach the top, Stanley got into contact with Gene Simmons who was also an up and coming artist. The two formed Wicked Lester and recorded their first album, which never got released officially. The group eventually failed due to lack of lack of resources. The two saw the need to recruit other talents to make the band a vibrant one. With the inclusion of Chris and Ace, the band was renamed, Kiss.

In 1974, a debut self-titled album was released. Paul Stanley's involvement in the group brought them many successes. The group then came out with its second album, Hotter Than Hill, of which Stanley performed an integral part before its release. The album performed creditably well and achieved the status of gold in US and Canada. The group followed with the steady release of new records like Dressed to Kill and Kiss Alive in 1975, Destroyer and Rock and Roll Over in 1976 and several others.

Gene Simmon, a former member of Kiss in the book Sex Money Kiss, praised Stanley for his tireless effort in projecting the band during the 1980s when they resolved to perform without makeups. In a memoir released in April 2014, titled Face the Music, Stanley was very critical on Kiss members Ace Frehley and Peter Chirs referring them as anti-Semitism.

Paul Stanley did lots of work with his group Kiss but also had time to feature other artists. He collaborated with Click Five on the single Angel To You (Devil To Me) which became an instant hit. He then released a self-titled album Paul Stanley in 1978. The album became a hit gaining a platinum status in US and gold status in Canada. He also found time out of his busy schedule to produce the debut album of New England band. A single on that album Don’t Ever Wanna Lose Ya became very popular and made it to the Top 40 hit in 1979.

In 1987-88 Paul Stanley recorded a solo album but did not officially release it, however, it was included in Kiss compilation Smashes, Thrashes & Hit. He also embarked on a club tour in 1989 and sang the soundtrack of horror movie Shocker. In 2006, he released his second solo album Live to Win and supported the album with a tour. He also toured in Australia the following year, which was filmed to produce the documentary Paul Stanley: Live to Dream.

Paul Stanley has married twice. His first wife was Pamela Bowen an actress filed for divorce after nine years of marriage in 2001. They were blessed with a son Nathaniel Perry Bowen. Stanley remarried in 2005 to Erin Sutton, a longtime girlfriend and since had three children, namely Colin Michael Stanley, Sarah Brianna and Emily Grace.

Since the commencement of his career, Paul Stanley has undergone two major hip replacement surgeries and anticipates having another soon. According to him, the operations were necessitated due to the deterioration of his hips as a result of constant performances in platform boots. The first one was in December 2004 after his Rock the Nation tour and had the second one December that same year to correct some complications which resulted from the first one. Stanley also had surgery on his vocal cord in 2011. He is quoted to have said "I hold myself to a higher standard than others do. With that in mind, I wanted to remedy a few minor issues that come with 40 years of preaching rock 'n' roll.”

Paul Stanley is currently doing ambassadorial work for About Face, a charitable organisation which advocates and educates on facial differences. Stanley chose this because he also had a congenital disability called microtia. He creates awareness through videos and appearances during fundraising for the organisation.

Paul Stanley did not just bless the mic but also won several awards and had lots of recognition. In 2006, he was inducted into the Long Island Music Hall of Fame for his great works. He won the Showman of the Year award of the Classic Rock Awards for 2008, in 2009 he won the Classic Gold Telly Award for his concert film One Live Kiss. Due to his continued hard work and dedication to music; House of Research Institute decorated him with the Sound Partners Lifetime Achievement Award. In 2014, he and other Kiss membersGene Simmons, Peter Criss and Ace Frehley, were inducted into the Rock and Roll Hall of Fame.