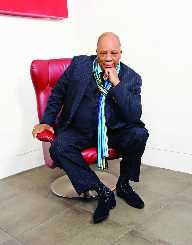 Quincy Delight Jones, Jr. was born on March 14, 1933, in Chicago. His father Quincy Delight Sr. was a semi-professional basketball player and carpenter. His mother was a bank officer. He also has a younger brother. Jones was introduced to music by his mother, who liked to sing religious songs.

When Quincy was six years old, he learned to play the piano. While he was still a child, Jones mother had a schizophrenic breakdown, and she was committed to a mental institution. His father then divorced and married Elvera, who had three children from her previous marriage. The couple had three more children together.

In 1943, the family moved to Bremerton, Washington. During this time, Jones started to discover music. The family later moved to Seattle, where he attended high school and became more involved in music. He learned to play the trumpet. His classmate Charles Taylor played saxophone, and they started to play with a band. When Jones was 14 years old, he met Ray Charles, who was an early inspiration to Jones.

In 1951, Jones enrolled at Seattle University, but only a year later he transferred to Berklee College of Music in Boston. After receiving an invitation from Lionel Hampton to tour as a trumpeter with his band, Jones left school.

When Quincy Jones was 19 years old, he traveled to Europe on tour with Hampton. In 1956, he toured as a trumpeter and musical director with Dizzy Gillespie. The band toured the Middle East and South America.

When he returned, Jones signed a deal with ABC-Paramount Records and started a career as a leader of his band. In 1957, he went to Paris and studied composition and theory. He became the music director at French record company Barclay Disques.

During the 1950s he and his band toured Europe. After the end of his tours in 1960, Jones formed a group of eighteen artists called The Jones Boys. The band had a terrible budget planning and later dissolved, leaving Jones in a financial crisis. Jones received a personal loan from Mercury Records and started working in New York as the musical director.

In 1964, Quincy Jones was promoted to vice-president of Mercury Records. The same year he also received an invitation to compose music for The Pawnbroker. After the big success of the film, Jones left Mercury Records and moved to LA to write film scores for other movies, all together - 33.

In 1975, Jones founded his own company Qwest Productions. He arranged and produced albums by Frank Sinatra and other major artists. He also provided the soundtrack for the musical adaptation of Wizard of Oz, starring Michael Jackson and Diana Ross. Jones produced Jackson’s all-time best-selling album Thriller.

In 1985, Jones used his influence and invited most of the American major record artists to record the song. We Are the World, to raise money for victims of Ethiopia’s famine. In 1988, Jones and Warner Communications collaborated to create Quincy Jones Entertainment. He signed a deal for ten pictures with Warner Brother and two-series agreement with NBC.

Jones had a good relationship with Miles Davis, and in the 70s he asked the artist to revive some of his previous albums in a new record. Davis declined, but in 1991 he agreed to perform at the Montreux Jazz Festival. The concert resulted in a record Miles & Quincy Live at Montreux, and it was the last Davis’ released album.

While working on The Wiz, Quincy Jones met Michael Jackson. Jackson asked Jones to recommend producers for his solo album. Jones gave him some names but ended up producing the record himself. Off The Wall later sold in more than 20 million copies. The next album, Thriller sold in more than 110 million copies. The pair’s last album together was Bad. In 2013, Jones sued Jackson’s estate for 10 million dollars for royalties and production fees.

Jones started to work with Frank Sinatra in 1958. In 1964, he arranged and conducted his second album It Might as Well Be Swing. Two years later he also did and arranged Sinatra’s live album Sinatra at the Sands.

Jones has also appeared in various TV projects and music videos. He hosted Saturday Night Live in 1990. He later produced his sketch comedy MADtv on Fox.

Jones ancestors include the poet Sidney Lanier, who had a baby with his great-grandmother, who was a slave. His DNA was tested in 2006, and he found out that he is a direct descendant of Edward I of England, and related to Betty Washington Lewis - sister of George Washington.

In 1974, Jones suffered from a brain aneurysm and cut back on his work to spend time with friends and family. His family and friends started to plan a service in his honor, and later Jones himself attended it.

Quincy Jones has been married three times. His first marriage was to Jeri Caldwell. They were married from 1957 to 1966 and had a daughter. His second marriage was to Swedish actress Ulla Anderson from 1967 to 1974, and the couple had two children. His third marriage was to Peggy Lipton, from 1974 to 1990. They had two daughters, Kidada and Rashida Jones, who have both become actresses. Jones also has a child from actresses Nastassja Kinski and Carol Reynolds.

Jones was a supporter of Dr. Martin Luther King Jr. He was also one of the founders of Institute for Black American Music. In 1970s Jones founded the Quincy Jones Workshops, which aimed to educate and honor the musical skills of inner-city youth. He has also worked with Bono and U2 for many philanthropic endeavors. Jones foundation Quincy Jones Listen Up Foundation helps to build homes in South Africa and aims to connect the youth with education and technology. In 2007, Jones endorsed Hillary Clinton for president.

He is the honorary member of The Jazz Foundation of America and has worked with the foundation to help elderly jazz musicians after Hurricane Katrina. Quincy Jones is also one of the creators of Global Down Syndrome Foundation.