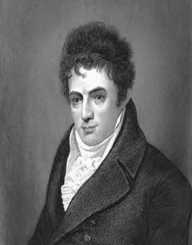 American inventor and engineer Robert Fulton was born in Little Britain Township, Pennsylvania on the 14 November 1765. He was one of five children and was raised on a farm. His father, Robert Fulton, was an Irish immigrant who met and married Mary Smith in Philadelphia. Fulton Sr. was a good friend of the painter Benjamin West. Fulton began drawing and sketching at a young age and in his teens, decided that he would become an artist.

Robert Fulton worked in Philadelphia as a portrait and landscape painter. He also worked as a draughtsman producing drawings of machinery and houses. It was during this time that he met Benjamin Franklin and painted his portrait. In his early twenties, he went to England where he studied painting with his father’s friend, the artist Benjamin West.

He did not achieve success with painting in England and became interested in the steam engine and its potential for canal and shipbuilding. He got involved with a project designing a canal system to replace the canal locks used and in 1794 was granted a patent for a double included plane system, designed for hauling canal boats of various problematic terrain. He also developed plans for cast iron aqueducts and a mechanical dredge to assist in canal construction.

In 1796, Robert Fulton's work on inland waterways was published as Treatise on the Improvement of Canal Navigation (1796). In 1797, Fulton went to France to do further research on canal construction. He became interested in the idea of building a plunging boat and presented the plan to the French government. He proposed that a plunging boat could be used to place mines on the bottom of a warship, creating a torpedo-like action. France was at war with England at the time and agreed to fund the project.

The Nautilus, the first submarine, was launched at Rouen, France. When the submarine was tested in 25 feet of water for 17 minutes; it was decided that it was not fast enough for the British sloops and the programme was halted. Fulton then began concentrating on using steam power in shipping. He was introduced to the American Foreign Minister to France, Robert Livingston.

Livingstone had a 20-year monopoly on steam navigation in New York State and, after Robert Fulton had presented his ideas for a steam-powered ship, the two men entered into a business partnership. With Livingston providing the funding, Fulton built a steam-powered boat that was launched on the Seine in 1802. The boat was based on the design of John Fitch, who had demonstrated a steamboat on the Delaware River in the U.S. in the late 1790s.

Robert Fulton returned to New York City in 1803 where he began finalising his plans for building a steamship based on the paddle wheel for propulsion. By this stage, he had bought a steam engine from a British company owned by James Watt. On the 17 August 1807, the steam-powered steamboat the Clermont was launched and steamed upriver from New York to Albany. The journey took 32 hours and travelled at a speed of five miles/8kms per hour. The Clermont was the first commercially successful steamboat, and Fulton went on to build 13 more vessels.

Steamboats aided the industrial revolution as well as assisting in the exploration of the continent. In addition to his inventions, Robert Fulton painted Benjamin Franklin’s portrait and had two paintings shown at the Royal Academy in London. There are numerous places counties, schools, streets and other places names honouring him in the United States. The U.S. Navy has had a number of ships named the USS Fulton, the U.S. Merchant Marine Academy has a Fulton Hall, and there is a bronze statue of Fulton in the Thomas Jefferson Building of the U.S. Library of Congress

Robert Fulton married Harriet Livingston on the 8 January 1808. They had three daughters and a son. Robert Fulton died of pneumonia in February 1915.