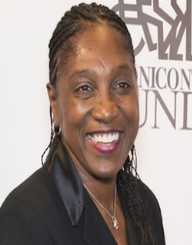 Teresa Edwards was born on July 19th, in 1964. She is a former U.S. women’s basketball player who bagged home four Olympic gold medals during her playing career. She has formerly been featured in Sports Illustrated magazine for being among top 100 greatest female athletes.

Teresa Edwards was born on July 19th, in 1964. Her place of birth was in Cairo, Georgia. For her high school education, she enrolled at Cairo High School.

As a youth, Teresa Edwards began playing in her high school basketball team. In total, while playing in high school, she scored 1,982 points. Due to her exceptional playing skills, she was credited with the recognition of being the player of the year in 1982.

After completing her high school education, Teresa Edwards went ahead and played for the Georgia Lady Bulldogs team. This was the University of Georgia’s leading team. She continued performing well and that she was credited with the recognition of being an All-American for two times.

Edwards helped her college team reach the final four both in 1983 and in 1985. Her talent on court impressed everyone, and she earned herself a position with the national team while she was still in college. She debuted at the Olympic Games in 1984. During this season, she bagged home a gold medal. With the record that she left behind in college, Edwards’ jersey number 5 was retired. This made her the third lady to be bestowed with that honor at the University of Georgia.

Later, in 1990, Teresa Edwards completed her college education going home with a degree in Leisure Studies.

Teresa Edwards continued demonstrating her prowess in the court while playing in the American Basketball League (ABL). She also played at the WNBA as she was selected by Suzie McConnell Serio, her former teammate. Serio was the Minnesota Lynx head coach and that the two had played together at the Olympic Games first in 1988 and later in 1992.

Teresa Edwards is the oldest sibling in a family of four children. She is the only daughter in her family.