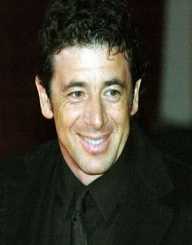 French entertainer Patrick Bruel was born on the 14 May 1959 in Tlemcen, Algeria to Pierre Benguigui and Augusta Kammoun. His parents separated when he was young, and his mother took him to live in France in 1962.

While pursuing a career in acting, Patrick Bruel was still interested in singing, and in 1982 he released a single Vide. His next single, Marre Cette Nana-la (1984) was a hit as was Comment Ca Va Pour Vous (1985). In 1986 cut his first album, De Face. Then in 1989, he released his second album Alors Regarde, which contained the hit Casser La Voix.
His third album Bruel was released in 1994, and a tour followed. The tour produced a live album in 1995 containing the song Who Has The Right which became a mega-hit and established him as a major recording star in Europe.

To date, Patrick Bruel has recorded ten studio albums and nine live albums as well as having appeared on numerous compilations.