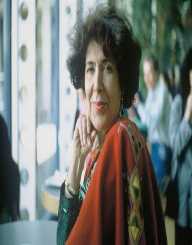 Fatima-ZohraImalayen best known as Assia Djebar was an Algerian filmmaker, translator, and novelist. Born on June 30, 1936, she is best known for being a voice for voiceless women and a positioned feminist. She is acclaimed as one of North African’s influential writers and among the women writing movements. Her writings explicitly deal with challenges of women in today’s society and the need for Algerian women to be infused in decision making positions. Her stance against males always seen as the head is unequivocal, terming it as anticolonial.

Assia Djebar was born to Tahar Imalhayene and Bahia Sahraoui on June 30, 1936. She grew up in Cherchell, Ain Defla a seaport village near Algiers. She started her primary education at the Mouzaiaville dans la Mitidja where her father taught. He later went to the Quranic private boarding school in Blida. Since women education in Africa was low at that time she was one of the only two ladies in the school. She had her high school education at the College of Blida in Algiers as the only Muslim in her class. She continued her education in Paris.

Assia Djebar’s first novel, La Soif was published in 1957 under the pen name Assia Djebar. This decision was because of fears that her father may be against the publications. She followed it with the release of Les Inpatients in 1958. Other publishing works include Les Enfants du Nouveau Monde in 1962 and Les Alouettes Nerves in 1967. She did two cinema works, La Nouba des femmes du Mont Chenoua, 1977, La Zerdaoules chants de l'oubli, 1979. Djebar’s work in L’Amour la fantasia 1985 revealed her real being. She wanted to be seen as a woman who has stood against all the odds to become an educated Algerian feminist, a woman advocator acted as the voice of the silent majority Algerian women and a Muslim intellectual. The book was translated as Fantasia: like An Algerian Cavalcade, Heinemann in 1993.

Assia always stood for the rights of women and the need for them to be involved in leadership through her novels. In 2005, Djebar became the first North African writer to be accepted into the Academie Francaise. The institution is mandated to preserve the legacy of the French language. She also became a Silver Chair professor of Francophone literature at New York University.

Assia Djebar returned to Algeria after the war year to teach history at the University of Algiers. She became the head of the French Department later on. She also taught French Literature at the Louisiana State University and New York University during her days in the United States of America from 1995.

Assia Djebar’s first marriage was to Ahmed Ould-Rouis in 1958 but divorced shortly. She went on to marry Malek Alloula, an Algerian poet in 1980. The couple lived in Paris, France until her death in February 2015 at age 78.

Assia Djebar received only three awards throughout her career. She won her first award Neustadt International Prize for Literature in 1996 and was followed by the Yourcenar Prize in 1997. Three years on, she won the Peace Prize of the German Book Trade.