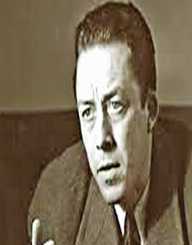 Albert Camus was born on November 7, 1913, in Drean, French Algeria. His father was an agricultural worker and fought in the Battle of the Marne during World War I. His father was wounded in 1914 and died at the army hospital. He and his mother, who was illiterate, worked as a house cleaner and they lived in poor conditions.

In 1923, Camus began studying at the LyceeBugeaud and was later admitted to the University of Algiers. At the university, he used to play football for the prominent university team. He was a goalkeeper with the Racing Univeristaired’Alger which won both North African Champions Cup and North African Cup in 1930. In 1930 he contracted tuberculosis and had to leave playing. To earn his living, Camus worked several different jobs, like tutoring and working as an assistant at the Meteorological Institute. In 1936, Camus graduated with BA in philosophy. He presented his thesis on Plotinus “Relationship of Greek and Christian thought in Plotinus and St. Augustine.

After graduation in 1935, Albert Camus joined the French Communist Party. He was looking for a way to fight the inequality between Europeans and “natives” in Algeria. He did not declare himself a Marxist but believed in the ideology of communism. The following year, the independence-minded Algerian Communist Party was founded. Camus was a part of it, but also joined the activities of the Algerian People’s Party. This got him in trouble with Communist party, for what he was later expelled. He then became a part of the French anarchist movement.
Camus began to write anarchist publications like Le Libertaire, La revolution Proletarienne and SolidaridadObrera.

In 1948 Camus met the anarchist Andre Prudhommeaux at the Anarchist Student Circle. Camus supported anarchists when the group supported the uprising of 1953 in East Germany. The strike started out as an uprising of East Berlin construction workers and soon escalated into the uprising against the government of German Democratic Republic. Camus also took part in support of worker’s uprising in Poland in 1956 and later in the year, the Hungarian Revolution.

Camus’s first marriage was to Simone Hile, but the marriage ended due to infidelity on both parts. During this time, Albert Camus founded Theatre du Travail, which lasted until 1939. He was also writing a socialist paper- Alger-Republican. After reporting on the poor conditions for peasants in north Algeria, he was fired from this positions. In 1939, he also wrote for a small paper Soir-Republican.

In 1940, Camus married for the second time to Francine Faure. She was a mathematician and pianist. Although Camus loved her, he did not believe in the institution of marriage. In 1945 she gave birth to their twins. During their marriage, Camus often had affairs. In 1945, he began working for the Paris-Soir magazine. He later moved to Bordeaux with all the rest of the Paris-Soir staff and finished his books The Stranger and The Myth of Sisyphus.

Camus was an atheist for all of his life and followed the Greek Solar Tradition. In 1947, Camus founded the Revolutionary Union Movement. The group believed in revolutionary syndicalism and opposed the tendencies of the Surrealist movement. Camus wanted to express the positive side of surrealism and existentialism, and reject the negativity expressed by Andre Breton. Besides this, he was also the founder of the European Federalist Movement in Milan and the French Committee for the European Federation. The latter organized its first conference in Paris, in 1945. The group disintegrated in 1957 when ideas of Winston Churchill became dominant in Europe.

Albert Camus died in 1960 in a car accident. At the time he was only 46 years old. He was planning to travel with his wife and children to a small town of Villeblevin, but at the last minute accepted a proposal from his publisher to go with a car.

Camus received the Nobel Prize in Literature when he was 44 years old, making him the second youngest person to receive the award. After his death, two of his books- A Happy Death and The First Man were published.