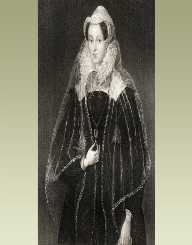 Mary II Of England was born on April 30, 1662, at St. James Palace, England. Her parents were James, Duke of York (later King James II and VII) and Anne Hyde. She also had one sister, named Anne, like her mother.

Being a part of a rich royal family made Mary’s childhood much different than a non-royal child’s childhood would have been. She and her sister did not live with their parents but instead were raised by a governess and servants. Of course, they saw their parents occasionally, so the girls were not completely out of touch with their family.

Mary II Of England did not have a “formal” education in a school. Instead, she was educated by private tutors. She did not learn all of the subjects that boys would have learned at the time. England in the 1600’s was still a highly patriarchal system in which girls were not valued as much as boys. Instead of focusing on subjects like business, Mary’s education focused more on dancing and art (at least in her younger years).

King James II of England (also known as King James VII of Scotland) died after the Glorious Revolution in 1689. The king had no legitimate sons, so his daughter was next in line for the crown. Mary II Of England was crowned as Queen of England in 1689. Her husband, William II, was also crowned at the same time. This was a strange thing to happen at the time, as usually, in this case, Mary II Of England would have been the Queen, while William would have been a king consort, which means that he would not have as much power as Mary II Of England, and he would not take the throne if she died before him. Instead, the couple agreed to be joint partners in both their marriage and reign, making William a proper king.

Together, Mary II Of England and William made a Bill of Rights the same year they took the throne. This gave more power to parliament, and took away some royal power, giving more power to the common people overall. This was a great change for the country, which made many commoners happy.

In the 1690’s war broke out in Europe. William went to fight while Mary II Of England stayed behind. While alone in England, Mary had total control (in the monarchy, anyway). She was strict, but a kind ruler. Under her rule, England remained a Protestant nation. This was a calming thing for the people of England, as in the century leading up to Mary II Of England II’s rule, England had switched back and forth between Protestantism and Catholicism many times.

Queen Mary II was diagnosed with smallpox in 1694. She died later that year on December 28, 1694. She was only 32 years old when she passed away. She was buried in Westminster Abbey.

After Queen Mary II’s death, King William II reigned alone. He never remarried or had any children. He later died in 1702. After his death, Mary’s sister, Anne, became the next queen of England.