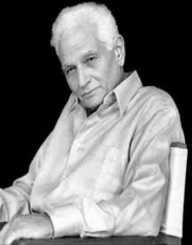 Jacques Derrida was a 20th-century French philosopher. His ideas including deconstruction had a great impact on many of the humanities.

At this time, Algeria had been part of France since 1870, so Jacques Derrida had full French citizenship. Derrida spent more of his early years in Algeria. During the Second World War, Jacques Derrida participates in football competitions with aspirations of playing as a professional.

When Jacques Derrida was twelve years old, he was immediately expelled from his secondary school because he was Jewish. This was in accordance to the anti-Semitic quotas established by the Vichy government. Rather than attend the Jewish schools that were formed, he spent that time playing football. However, he still read many books from philosophers and authors including Rousseau, Camus, and Sartre.

Jacques Derrida did return to school. He attended Lycée Bugeaud and Lycée Louis-le-Grand and continued his studies of the philosophers. In 1952, Derrida was enrolled at the École Normale Supérieure in Paris. He graduated with a master's degree in philosophy. Later, he earned a grant to attend Harvard University from 1956 to 1957.

The Algerian War of Independence began in 1954. Instead of enlisting in military service, Jacques Derrida asked to teach French and English to the children of the soldiers. He held this position from 1957 to 1959. In 1960, Jacques Derrida was hired on to teach philosophy at the Sorbonne in Paris. He was the assistant to Suzanne Bachelard, French philosopher, and daughter of philosopher Gaston Bachelard. This position was for four years.

After that, he became the permanent profession at his alma mater, École Normale Supérieure. He taught at the institution for twenty years. Jacques Derrida started to connect with a group of philosophers and literary theorists in 1965. The group was called Tel Quel, and they published their essays and other works. Derrida was a regular author and contributor for seven years. The 1966 lecture on “Structure, Sign, and Play in the Discourse of the Human Sciences” at John Hopkins University gave Derrida international recognition. In the next year, Derrida published three books including Of Grammatology. He continued to publish books and essays as well as give lectures.

Between 1983 and 2002, Jacques Derrida is credited to documentaries. He contributes to Ghost Dance about the complexity of conceptions of ghosts memory and the past. He also took part in Derrida's Elsewhere in 1999 and Derrida in 2002. His autobiography Circumfession was published in 1993 while a compilation of papers was published in 2001 under the title The Work of Mourning.

Jacques Derrida married Marguerite Aucouturier in 1957 in Boston, Massachusetts while at Harvard. The couple had two children. In 1985, philosopher Sylviane Agacinski gave birth to Derrida's son. Jacques Derrida died on October 9, 2004, in Paris, France at the age of 74. He died during surgery related to pancreatic cancer. He will be remembered for his development of the semiotic analysis form of deconstruction.

Jacques Derrida left behind scores of books and essays while he presented to thousands over his career. Jacques Derrida was a professor at some universities, but he was also a visiting professor at academic institutions including Yale, New York University, and the New School for Social Research. As a pioneer of post-structuralism and postmodern philosophy, Derrida gained many critics as well as many admirers.

In 2003, Jacques Derrida was diagnosed with pancreatic cancer. His death was related to his disease.