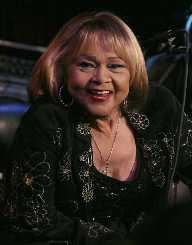 Etta James was born in 1938 as Jamesetta Hawkins in Los Angeles, California. Her mother Dorothy was just fourteen years old at the time. There is no information about her father’s identity. As Dorothy was very young, she left James often alone, and therefore James had several foster families. James called her mother Dorothy “The Mystery Lady” due to her often disappearances.

The first musical training for Etta James began when she was only five years old. An artistic director form a Baptist Church tutored her. It was stated he hit her often in the chest while she was singing; therefore she developed a loud voice from her stomach.

The musical director was known to be abusive, and sometimes he abused James to sing for his friends late at night. This led James to bed-wetting and other problems. Later in life, this early negative experience led to issues sometimes performing on demand.

Etta James met Johnny Otis at the age of fourteen. He saw James’s band “Creolettes” performing in a nightclub, and decided to work with them. He persuaded the band to change the name from “Creolettes” to “Peaches” and Jamesetta to change her name to Etta James.

Johnny Otis inspired James to perform a song “Dance with me, Henry,” which was very successful and reached the top of “Hot Rhythm & Blues Tracks” chart. James left the band “Peaches,” and made another viral song “Good Rocking Daddy.”

In 1960, Etta James started working with Argo Records. She made a couple of hits with them, some of them “If I Can’t Have You,” “Spoonful,” “All I Could Do Was Cry” became widely popular and recognized.

In late 1960, the first album was released. This album contained songs performed in the style of jazz, blues, R&B. The same year, she released another album “The Second Time Around.” Both albums were very successful and contained several songs that made it to top of the charts.

After James released another album “Etta James Rocks the House” in 1963, her career slowed down. She returned in 1967 with several top songs, as “Tell Mama” and others. This started a couple of years of success until she developed a drug and alcohol problem after 1974. She performed very little for the next ten years.

In 1984, Etta James returned to the stage, by performing at the 1984 Summer Olympics opening ceremony. She sang the song “When the Saints Go Marching In.” James has a voice of contralto. Her singing style has changed throughout the career, but she is nevertheless considered one of the overlooked musicians in the music industry in the United States. She was not adequately recognized until the beginning of the nineties when she received several awards and nominations.

At the beginning of the seventies, Etta James had a massive heroin addiction problem. She was regularly in and out of rehabilitation facilities. She married Artis Mills in 1969, who later served ten years in prison for heroin possession. They stayed married regardless of the time he had spent imprisoned.

Because of her addiction problem, James had to spend time in a mental care facility for 17 months. She never really recovered from the drug addiction, as she had several more visits to treatment facilities. She was not only addicted to heroin but also had a painkiller addiction, for which she underwent treatment in 2010.

Etta James had two children. Both are boys, and both developed their careers in the musical direction. The eldest son Donto became a drummer and performed with his mother in 1993, and the youngest son Sametto became a bass guitar player, and they performed together in 2003.

At the end of life, Etta James had several health issues. In 2008 she was diagnosed with Alzheimer’s disease. It was her son who revealed it, as she did not want this to be known publicly. She was taken to a hospital in 2010 due to an MRSA infection and got diagnosed with leukemia in 2011. She died because of the progression of leukemia in 2012, at the age of 73. Her grave is in located in Inglewood Park Cemetery in Los Angeles.