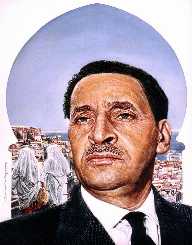 Ahmed Ben Bella was born on December 25th, in 1916. He stands as one of the most prominent figures in Arab nationalism. Later in his political career, he became the First President of Algeria. He took over as the president from 1963 to 1965.

Ahmed Ben Bella was born on December 25th, 1916. His birthplace was in Maghnia in Western Algeria. During the time of his birth, the French colonists had begun their colonization into the Algerian lands. Ben Bella was one among the seven children born to his father, a local farmer. Growing up, Ben Bella was much affected by on-going racial discrimination brought about by French colonists.

After quitting his studies, Ahmed Ben Bella enrolled with the French Army in 1936. This was one of how Algerians would advance under the rule of the French colonists. After being posted to serve in Marseille, Ben Bella joined a French football team named Olympique de Marseille. He played for the club for about a year since 1939 to 1940. He participated in a match against their rival team, FC Antibes. He managed to score a goal during this game. At some point, he later played for IRB Maghnia.

Ahmed Ben Bella firmly believed that he would help Algerians out of the racial discrimination issues that they were going through. As a result, he enlisted in the French Army for the second time in 1940. At the onset of World War II, he, therefore, had to fight for the French troops. Accordingly, he was honored twice for his efforts.

When the German soldiers defeated the French forces, Ben Bella was relieved of his duties. Soon, he joined the 1st Moroccan Infantry Division. Within a short period, he had risen to the ranks of being a sergeant major.

On May 8th, 1945, France organized for celebrations after German forces had surrendered to them. Simultaneously, significant protests began to occur in Setif, one of the major towns in Algeria. Around this period, people protested against cruelties that they experienced as a result of colonization. A protest that lasted for five days claimed the lives of many people amounting to about 1,500 Algerians and over 100 Europeans. This came as a shock to Ben Bella, and from this point henceforth, he dedicated his time to fighting for Algeria’s independence.

After the bitter experiences that transpired in Setif, Ahmed Ben Bella returned to Algeria with an active mission to fight the French forces. On realizing his intentions, the French authorities sent troops to assassinate him in his home. They however failed. Ben Bella had to flee. He later joined the government that was headed by Messali Hadj.

Together, the two individuals went ahead and established a paramilitary organization called Organisation Spéciale. In a bid to gain funds that would support the new organization, Ben Bella robbed a bank in 1949. Unfortunately, he was caught later on and sent to prison in Blida in 1951. He was sentenced to 8 years in jail.

Ahmed Ben Bella managed to escape and had to seek refuge. First, he went to Tunisia before later moving to Egypt. He arrived in Cairo in 1952. Here, he founded the Front de Liberation Nationale – FLN. This was a revolution that would aid in fighting the French forces.

A good number of Algerian national groups began to join FLN, and only Algerian National Movement was left out. All this time, Ben Bella assassination attempts failed. In 1956, for example, he narrowly escaped death for two times. He was however caught the same year and jailed until 1962. Upon his release on July 5, 1962, Ben Bella had a firm reputation with the people.

Ahmed Ben Bella's popularity grew after Algeria earned its independence and by September 1962 he controlled a large part of Algeria. He was first elected as the Prime Minister, and in September 1963, he was chosen as the First President of Algeria.

While serving as the president, he was best remembered for his reforms including his a quarter allocation of the federal budget to education. He also pushed for agricultural reforms such as the autogestion and seizing of large tracts of land that were owned by the French colonists.