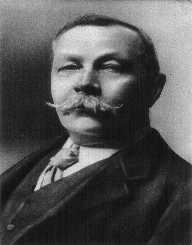 English humorist and writer Jerome Klapka Jerome was born on the 2 May 1859 in Caldmore, Walsall, Staffordshire, England. He was the son of Jerome Clapp Jerome and Marguerite Jones. Jerome was the youngest of four children born to the couple. He had two sisters Pauline Deodata and Blandina Dominica plus a brother Milton Melancthon who died aged six.

Initially, his father’s family name had been Clapp, but this was changed to Jerome. His father was a nonconformist preacher who was involved in the iron and coal industries, owning a colliery. The family were reasonably well off and lived a comfortable middle-class lifestyle until the family business failed in 1861. After the failure of his father’s colliery business, the family moved to London where they lived in Poplar in the East End, and Jerome was raised in relative poverty.

Jerome was a pupil at the Philological School which later became known as Marylebone Grammar School.

After his father had died when he was fourteen, Jerome left school found work as a clerk at the London and North Western Railway. He also worked as a schoolmaster. When his mother died two years later in 1875, Jerome decided to become an actor, something both his religious parents would have disapproved of. Working with touring companies did not pay well, and he was reduced to homelessness, sleeping on the streets of London. He tried working as a journalist while at the same time gaining work as a solicitor’s clerk.

Jerome also started writing, and in 1885 his first book On the Stage and Off: The Brief Career of a Would-Be Actor was published. This book was inspired by the Longfellow poem By the Fireside and gave Jerome the idea of writing humorously about his acting experience. He then had a collection of essays published, The Idle Thoughts of an Idle Fellow (1886).

Jerome began writing Three Men in a Boat after his marriage in 1888, and the book was published in 1889. This book, a comic masterpiece, proved to be incredibly popular and he became a literary sensation. Despite the success of his first book, Jerome experienced problems because reviewers refused to take his subsequent work seriously. He also ran into prejudice because he was a member of the lower-middle class. His second novel Weeds (1892) was published anonymously, and because of the nature of the content, a story of sexual corruption, his publisher halted the sale of the book. In was only in 1968 that Weeds (1892) became known as one of his works.

Jerome continued writing and left eight novels, collections of sketches and short stories, autobiographical work, plays and journal articles. He was also the editor of The Idler, a monthly publication, and To-Day, a weekly. (After being sued for libel, Jerome was forced to sell his interests in both magazines to cover costs of nine thousand pounds.) Other work included Three Men on the Bummel which was published in 1900, Paul Kelver (1902) and a play The Passing of the Third Floor Back (1908) and All Roads Lead to Calvary (1919). Jerome published an autobiography My Life and Times in 1927.

Three Men in a Boat is considered one of the comic masterpieces written in the English language.

Jerome was made a Freeman of the Borough of Walsall in 1927.

In 1888 Jerome married his cousin Georgina Elizabeth Stanley Marris. Marris had a five-year-old daughter Elsie from a previous marriage, and the couple had a daughter Rowena (b.1898-d.1966).

During World War I Jerome volunteered but was not accepted because of his age. Instead then volunteered as an ambulance driver working with the French Army.

Jerome K. Jerome suffered a stroke and subsequently died on the 14 June 1927 and is buried in Ewelme in Oxfordshire England.