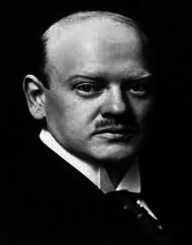 German politician and Nobel laureate Gustav Stresemann was born on the 10 May 1878 in Berlin, Germany. His father owned a successful restaurant and tavern.

Gustav Stresemann was a pupil at the Andreas Real Gymnasium then did his tertiary school at the University of Berlin and Leipzig University. He studied political economy, philosophy, and literature. His doctoral thesis was an economic investigation into the bottle beer trade in Berlin

In 1901 Gustav Stresemann took up a position as a clerk with the Association of German Chocolate Manufacturers in Dresden. Then in 1902, he became the business manager of the local branch of the Manufacturer Alliance. It was around this time that Stresemann showed a flair for organization and developed his belief that management should recognize labor’s right to collective bargaining.

Stresemann was in favor of a strong navy to protect overseas trade, he also supported unrestricted submarine warfare during World War I, and he opposed the Treaty of Versailles. Stresemann was a dedicated Nationalist, but after World War I, he went an ideological change regarding combat and the use of force. Stresemann also changed his mind regarding the Treaty of Versailles hoping that signing it Germany would once more function within the European community and become prosperous again.

From the 13 August 1923 until the 23 November 1923, he served as Chancellor of Weiner in a coalition government. Then in 1924, he was appointed Foreign Minister During this time the Weimar Republic was facing enormous problems with hyperinflation, revolutionary forces, and public disquiet.

Gustav Stresemann used his organizational skills to put together the Great Coalition consisting of pro-democracy, moderate parties. Under his leadership, France left the Ruhr, a planned general strike was called off, and Germany joined the League of Nations. He also organized jobs centers and introduced unemployment benefits.

Stresemann was also involved in getting Charles Dawes, the US Budget Director, to agree to lend Germany eighty million gold marks to re-ignite the German economy. And the Locarno Pact and The Treaty of Berlin were both signed. Stresemann was working on the Young Pact (1930) when he died in 1929.

Gustav Stresemann shared the 1926 Nobel Peace Prize with French statesman and politician Aristide Briand for their postwar efforts in stabilizing both their countries.

After a few years of being unwell, Gustav Stresemann suffered a stroke. He died in Berlin in October 1929.