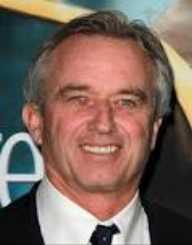 Robert Kennedy Jr. is a man of multiple hats. He is an environmentalist, lawyer, author, and academician.

Robert Kennedy Jr. was born in Washington DC on 17th January 1954. Together with his siblings, he was brought up in Virginia. His father Robert Francis Kennedy is former US Attorney General and New York Senator. Kennedy Jr. is a nephew to former US President John Fitzgerald Kennedy and former US Senator Ted Kennedy.

The childhood life of Kennedy Jr. was tough. He saw his uncle President Kennedy, killed when he was nine years. His father, Robert Kennedy was also assassinated when Kennedy Jr. was fourteen years old. The murders pushed him to drugs. He was once arrested in Massachusetts for having marijuana.

Robert Kennedy Jr. attended Palfrey Street School and graduated with a diploma. He went to Harvard College and the London School of Economics. In 1976, He graduated from Harvard with a Bachelor of Arts degree. Kennedy Jr. went on to get a Master degree in Law from Pace University. At the University of Virginia Scholl of Law, he attained the Doctor degree in Law.

In 1983, Kennedy Jr. worked as the Assistant District Attorney in Manhattan, New York. In 1984, he was convicted of being in possession of heroin at a South Dakota airport. He was stripped of his practicing license. Kennedy Jr. served his sentence by doing community service for Riverkeeper. This was an environmentalist organization working to conserve the Hudson River. After his service, Riverkeeper employed him as its Chief Attorney. He also got back his practicing license in 1985.

Robert Kennedy Jr. filed a lawsuit against the practice of shooting lead shots into Long Island Sound. He won the case in 1986. He went on to win several environmental lawsuits against different municipalities. In New York, he managed to force the administration to start treating its sewer. Some large industries were also forced to stop discharging their waste into rivers.

In 2000, he co-founded a law firm that represents entities affected by environmental pollution. In 2001, Kennedy and Madonna got a settlement for property owners in Pensacola. The USD 70 million was to cover the contamination done by chemicals from Superfund site. He won many landmark lawsuits representing American Indian tribes.

In 2007, Kennedy Jr. was a finalist nomination for the Trial Lawyer of the Year Award. He then partnered with Morgan and Morgan P.A. law firm. The partnership made him the Legal Counsel.

Apart from filing lawsuits, Kennedy Jr. is a known proponent of a clean environment. He has over the years championed the use of renewable energy. He is a critic of the environmental degradation done by the US military.

Robert Kennedy Jr. convinced the late Cuban leader Fidel Castro to stop his attempts of building a nuclear plant. He has been to Latin America helping local tribes in conservation.

Kennedy Jr. is a longtime critic of the White House. From George W. Bush to Barrack Obama, he has always differed on energy issues. To Kennedy, successive US administrations have done little to create a clean environment.

He was a member of the Edward Kennedy campaign team in 1979. Edward was running for US president. In 2000, he campaigned for presidential candidate Al Gore. He endorsed John Kerry presidential bid in 2004. In 2007, Kennedy Jr. supported Hillary Clinton. He campaigned for Barrack Obama after Obama won the nomination.

Having come from a political family, many expect him to run for office. Robert Kennedy Jr. has expressed his will to run for elective office. Several times, he has talked of running but has never gone for the nomination.

Robert Kennedy Jr. has married three times. His first marriage was to Emily Black in 1957. The couple divorced in 1994. They had two children namely, Robert Francis Kennedy III and Kathleen.

He then married Mary Richardson in 1994. They got four children in their union, John, Kyra, William, and Aidan. His wife Mary committed suicide in 2012.

Robert Kennedy Jr. is an example of what good resolutions to serve can do. He has used a good part of his life helping the less fortunate in court. Having survived a trying childhood, Kennedy Jr. has risen to be one of the leading lights of environmental conservation in the US.