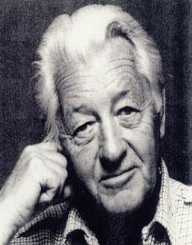 American writer and conservationist Wallace Stegner was born on the 18 February 1909 in Lake Mills, Iowa. His family lived in Saskatchewan, Canada (1914-1921) and moved to Salt Lake City, Utah in 1921.

Wallace Stegner was a gifted student and graduated from high school at the age sixteen. In 1925 he enrolled at the University of Utah where one of his professors was the writer Vardis Fisher. By 1930 he obtained a B.A. and subsequently did his M.A. at the University of Iowa (1930-1932) and completed his doctorate in 1935.

During his time at Harvard University, Wallace Stegner published nonfiction as well as The Big Rock Candy Mountain, a semi-autobiographical story based on his childhood. Wallace Stegner went on to publish over sixty nonfiction books and novels including Beyond the Hundredth Meridian: John Wesley Powell and the Second Opening of the West (1954), The Gathering of Zion: The Story of the Mormon Trail (1954), The Sound of Mountain Water (1969), Angle of Repose (1971), The Spectator Bird (1976), Recapitulation (1979), Conversation with Wallace Stegner on Western History and Literature (1983), American Places (1985) and Crossing to Safety (1987). His final publication was Where the Bluebird Sings to the Lemonade Springs: Living and Writing in the West (1992).

In 1971 Wallace Stegner won a Pulitzer Prize for his novel Angle of Repose, and in 1976 he won the National Book Award for The Spectator Bird. Where the Bluebird Sings to the Lemonade Springs: Living and Writing in the West (1992) won a nomination for the National Book Critics Award.

Wallace Stegner married Mary Stuart Page in 1934, and the couple remained happily married for sixty years. Wallace Stegner died on the 13 April 1993 after being involved in a motor accident in Santa Fe, New Mexico. He was eighty-four years of age.