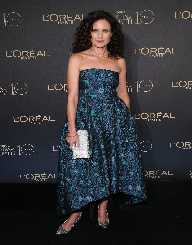 Andie MacDowell was born on April 21st, in 1958. She is celebrated for being an American actress. Aside from this, she has also earned herself recognition due to her modeling career. MacDowell made her first film appearance in 1984 after featuring in Greystoke: The Legend of Tarzan, Lord of the Apes. She earned herself nationwide fame after the role she played in Sex, Lies, and Videotape – 1989. After this, other films followed suit with the likes of Green Card – 1990, Short Cuts – 1993, Groundhog Day – 1993 and Four Weddings and a Funeral – 1994. Recently, she played the lead role in Cedar Cove, a 2013 TV series that aired until 2015.

Andie MacDowell was born on April 21st, 1958. Her place of birth was in Gaffney, South Carolina. Her mother Pauline Johnston worked as a music teacher. On the other hand, her father, Marion St. Pierre MacDowell was a lumber executive.

Later on, MacDowell went ahead to pursue her studies at Winthrop University. After two years, she relocated and went to reside in Columbia, South Carolina. During her time at the university, MacDowell took several odd jobs with the intentions of earning a living. With time, she dropped out of school to pursue a modeling career. She modeled for renowned brands such as Calvin Klein and L?'Oreal. It was after this that she made her on-screen debut with her role in the 1984 film dubbed Greystoke - The Legend of Tarzan, Lord of the Apes.

Following her debut role in 1984, the following year Andie MacDowell landed on another role in St. Elmo's Fire -1985. This was followed by another character in The Secret of the Sahara – 1988. In 1989, her acting career took a major turn as she featured in Sex, Lies, and Videotape. She was cast as Ann Bishop Mullany in the hit film. Due to her remarkable performance, she was nominated for several awards but never won any.

Another important role came in 1990 with her portrayal as Brontë Parrish in the Green Card. Again, her acting talents were recognized as she was part of the nominees for the Golden Globe Award for Best Actress at the time.

Other notable films that MacDowell featured in included Short Cuts – 1993 and Four Weddings and a Funeral – 1994. In her role in the latter film, she was again nominated for the Golden Globe Award. She continued to play minor characters in some movies during the 90s. This is because she wanted to spare more time and spend with her family and kids.

In 2012, MacDowell was back on the big screen with Jane by Design TV series while playing the role of Gray Chandler Murray. She featured in the series for 18 episodes. In 2013, she starred in Cedar Cove where she plays the role of a judge named Olivia Lockhart. The series was aired for about two years before ending in 2015.

In 1986, Andie MacDowell tied the knot with Paul Qualley. The two welcomed three children into their marriage namely Justin, Margaret, and Rainey. The however divorced each other after 13 years of being together. In 2001, she got married for the second time to Rhett Hartzog. This marriage also did not last long as it came to an end in 2004. Two years later, she was engaged to be married by Kevin Geagan, a renowned businessman. However, the two parted ways before getting married.