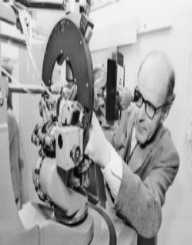 Molecular biologist Max Ferdinand Perutz was born on the 19 May 1914 to Hugo Perutz and Gisela Goldschmidt in Vienna, Austria. He was born into a prosperous family who had established themselves in the textile trade. Later, during World War II, the family lost their business and were reduced to becoming refugees in Britain.

Max Perutz attended school at the Theresianum, a grammar school in Vienna, Austria. It was during his high school years that he became interested in chemistry. He began his tertiary studies at Vienna University in 1932. In 1936, he became a research student at Cavendish Laboratory at Cambridge University under J.D. Bernal.

In January 1939 Max Perutz began working as a research assistant to Sir Lawrence Bragg, using a grant from the Rockefeller Foundation. This grant was available until 1945. He was then awarded an Imperial Chemical Industries Research Fellowship.

From October 1947 until 1962 he was head of the Medical Research Council Unit for Molecular Biology with J.C. Kendrew. In 1953 Perutz demonstrated that the diffracted rays from protein crystals could be phased by a comparison of the patterns from crystals of the protein with or without heavy atoms attached. His 1959 work, where he showed the molecular structure of the protein hemoglobin resulted in him sharing the Nobel Prize in Chemistry in 1962 with his collaborator, J.C. Kendrew.

Then in March 1962, he was appointed Chairman of the Medical Research Council Laboratory of Molecular Biology.

Max Perutz is often called the father of molecular biology because his work is one of the foundations on which current science is built.

After winning the Nobel Prize in Chemistry in 1962, Max Perutz was made a Commander of the British Empire in 1962. He was also a Fellow of the Royal Society and an honorary member of the American Academy of Arts and Sciences. In 1979 he was awarded the Copley Medal.

Max Ferdinand Perutz died on the 6 February 2002 in Cambridge, England.