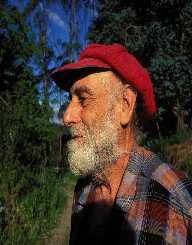 Friedensreich Hundertwasser was born on December 15, 1928. He was an Austrian architect and artist. He was known for his of numerous colors in his works. He developed an interest in art while he was still young. He used to sign his works as Hundertwasser, a signature that he used throughout his career. He began as an artist but later on became an architect by venturing into architecture. He was the one who designed ‘Green’ which developed when he worked in the field of environmental protection. He used to design stamps and flags as well. He died on February 19, 2000.

Friedensreich Hundertwasser was born on December 15, 1928, in Vienna. He was born to Elsa Stowasser and Earnest Stowasser. His mother was Jewish while his father was a technical civil servant and a veteran of World War I. His father died in 1929 and was survived by his wife and Hundertwasser. He showed an interest in art when he was only seven years old. His love for art was discovered in 1936 at the Montessori School in Vienna.

In 1938, Friedensreich Hundertwasser and his mother moved in with his aunt and grandmother. Austria was controlled by the Nazi then. In 1941, he joined the Hitler Youth with the intention of not letting them know that he was of Jewish descent. His mother on the other posed as a Christian to avoid persecution. While at the academy He used sobriquets such as Hundertwasser, Dunkelbut, and Regentag on his arts but he later adopted Hundertwasser which he used in his whole career.

After leaving the academy, Friedensreich Hundertwasser travelled to Italy where he became friends with painter Rene Bro. In 1952 through to 1953, he received success in Vienna with a show of his paintings. His paintings were mostly distinguished from others because of the bright colors that he used. His paintings idealized the harmony of man with nature.

In 1958, Friedensreich Hundertwasser presented his view in a public speech of how paintings should illustrate the condition of the human and not straight lines and traditional architectural designs. In 1967, he lectured in the nude where he mentioned that human beings have three skins, that is, epidermis, clothing, and house. In 1972, he added to his theory of the human being skin the social environment and the planetary skin. He emphasized the influences beyond the individual.

In 1983, Friedensreich Hundertwasser designed the Koru Flag of New Zealand. This led to the growing and maturity of the Hundertwasser philosophy. He, later on, became an ‘architect doctor’ by remodeling a factory and a grain silo. He also implemented the growing of plants on rooftops and floors that were not even. In 1999, he started a project in Germany which he did not complete. He died before he could complete the project.

In 1958, Friedensreich Hundertwasser married Herta Leitner whom he divorced in 1960. In 1962, he married Japanese artist Yuko Ikewada whom he divorced in 1966. He died on February 19, 2000, at sea from Auckland, New Zealand. He was on a cruise ship when he died. The Hundertwasser House built in Vienna was named after him. The building is a major tourist attraction in Vienna. The building was completed in 1985 under Hundertwasser ’s partnership with architect Joseph Krawina.