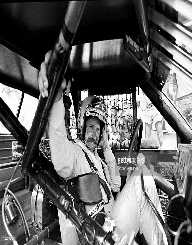 Dale Earnhardt chose to follow his father’s footsteps. He commenced his racing career when he received the Rookie of the Year recognition. His zeal made him garner Winston Cup award, the position that he held for more than two years. He partnered with several NASCAR drivers where they appeared in a sitcom film titled Stroke Ace. After several years of waiting, Dale garnered the Daytona 500 where he followed it up with another filmed named BASEketeball. Dale was also a widely known businessman who dealt with selling and purchasing new cars. As he continued to up his skills, Earnhardt suffered a brutal accident and to his fans surprise he was up and running after one to two weeks. His faith and devotion in racing, made him be celebrated as the most envied NASCAR driver of all times. Although he died, later on, his legacy still plays a major part in the Sports industry.

On April 29, 1951, Dale Earnhardt was born in Kannapolis, North California in the U.S. to Ralph Lee Earnhardt and Martha Coleman. Ralph was known as a North Carolina truck driver who defined perfection at its best. Dale didn’t wait to be told his early and life career; he knew what he wanted right from the start. In the long run, he opted to drop out of school just to pursue his calling.

Dale’s career started when he won the Winston Cup in the World 600 longest race. He was first seen at Charlotte Motor Speedway where he polished his racing career. He later joined the Rod Osterlind Racing where he won a Bristol race.

From 1984 to 1992, Earnhardt won various races. The most notable ones include the Winston Cup Champions, the NASCAR record, the man in Black pseudonym, Coca-Cola 600 among others. In his 1996 season after dominating the Speed weeks racing field, Dale suffered a severe accident in Talladega. But he embraced hard work where he raced in Indianapolis the following week. Even though he showed active signs of leading, he lost due to the physical wounds.

At 17 years old, Earnhardt married Latane Brown in 1968.The couple was blessed with a son, Kerry Earnhardt. They later parted ways after four years of courtship. He later married Brenda Gee in 1971 where they had two children, Dale Earnhardt Jr. and Kelley King. They divorced after few years where he went on and married Teresa Houston, and they had a daughter, Taylor Nicole. His life was cut short after a grisly accident where it was confirmed that he died due to head trauma at 49 years old. Dale Earnhardt will always be remembered as an all in one superstar.