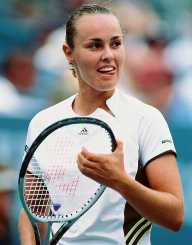 Martina Hingis is a Swiss professional tennis player born on September 30th, 1980. She is a talented player, currently the No.1 according to WTA in doubles. Formerly, she was No.1 singles player in the world. In the 1990s, she garnered three Australian Open titles, the US Open and also Wimbledon.

Martina Hingis took to the footsteps of her mother who is also a star in tennis. In fact, she began training four years old Hingis to play the sport. By the time she was twelve, she had emerged the champion of a Grand Slam junior title. Later in a total of 209 weeks, she was already World No. 1. Among her other victories include advancing to the French Open finals in 1999 before losing to Steffi Graf.

Martina Hingis was born on September 30th, 1980. Her place of birth was in Kosice, Slovakia. She is the daughter of the tennis stars Karol Hingis and Karol Hingis. She was brought up in Czech Republic (previously known as Rožnov).

Sadly, her parents divorced when she was only six. Her mother relocated to Trübbach in Switzerland when she was seven and took Hingis along with her. While there, Andreas Zogg took her mother’s hand in marriage. He was a Swiss computer technician. As a result, Martina also acquired Swiss citizenship.

Martina Hingis along Helena Sukova won the Wimbledon doubles title of 1996. Hingis at the time was 15 years old. She then became the youngest tennis player ever to be a Grand Slam champion.

In 1997, she also won the Australian Open making her the youngest in the Grand Slam tournament singles. In this year, she also merged champion of the U.S. Open singles championships. Both in 1998 and 1999, she maintained her Australian singles crown.

Unfortunately for the skilled player, she was forced to give a break from active sports from 2003 after sustaining injuries. However, she returned in 2006 where she played with Mahesh Bhupathi and emerged the Australian Open mixed doubles title winners. They also won the Italian Open title that year. She was also honored with Laureus World Sports award for her great comeback.

Towards the fall of 2007, it was revealed that the star tennis player had tested positive for cocaine and was under further investigations. As a result, she decided to retire from her career. The International Tennis Federation suspended her for two years, starting January 2008.

Later in 2013 Martina Hingis began playing professionally once again but as a doubles player.  In 2014, she played alongside Sabine Lisicki in Miami Open, and they won. In the same year, she also advanced to the U.S. Open finals playing beside Flavia Pennetta. Also, she won in the Australian Open mixed doubles alongside Leander Paes.

Martina Hingis exchanged wedding vows with a French equestrian show jumper, Thibault Hutin on December 2010. They later separated upon which Hingis began a relationship with a sports manager by the name Spaniard Ros.