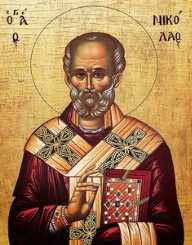 Saint Nicholas aka Nicholas of Bari or Myra never missed a moment to help the oppressed. His hospitality brought Saint’s name into existence. Not only is he a patron of sailors but also children as well as thieves and Barrel makers. His thought of delivering gifts to children gave birth to ‘Santa Claus’ moniker.

Saint Nicholas was first seen in the world on 15 March 270 AD in Patara, Turkey. His closest uncle served as a Bishop where he took time with Nicholas during Church sessions. After some time he was ordained as a Bishop succeeding his uncle. Nicholas spent his childhood life in Church praying and reading motivational books.

It was in the city of Myra (Demre, Turkey) that Nicholas’s church was stationed.  As he continued to serve the Lord, Nicholas urged local youths to follow his belief. Well, his kind and noble nature towards his flock nicknamed him as a wonderworker.

As the patron of children, Saint Nicholas didn’t disappoint the little ones. He first started giving gifts secretly in the Netherlands and Germany during his feast day- December 6. The impression gave rise to Santa Claus moniker came to existence.

Saint Nicholas didn’t escape punishment for being a staunch believer. He was persecuted during Roman Emperor rule, Diocletian from 303 to 311. Instead of him giving life to his Creator, he suffered torture and imprisonment. Lucky he wasn’t killed.

Even before he was born, his parents took care of the needy and sick as their own. The lineage was passed on to Nicholas when they succumbed to an infectious disease. As the only born child, he inherited his parent’s wealth. Sources say that he is the first Saint to be considered as a philanthropist with the way he settled on his wealth.

In England, over 370 churches were dedicated to no one else that St. Nicholas; St. Nicholas Church in Chawton, Hampshire, and countries like Switzerland and Russia.

Even though Saint Nicholas is profoundly praised far and beyond, there’s no clear or visible evidence of his actual life. Nevertheless, his flock still celebrates his life as a miracle-worker. It is said that St. Nicholas died on December 6, 343 AD. His remains are consigned in Bari, Italy. Turkey submits that they still possess Saint Nicholas remains.