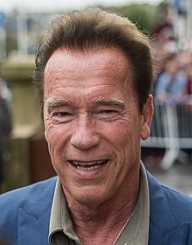 Arnold Schwarzenegger was born near Graz, Austria on July 30th, 1947 to Gustav and Aurelia Schwarzenegger. He was the youngest of two children. His older brother Meinhard proceeded him. Life in the Schwarzenegger household was strict and focused on raising conformists.

Schwarzenegger has mentioned that he dealt with what we could call abuse today; hair pulling, being whipped with a belt. He says every home in Austria and Germany at that time was the same. It might have been worse for Arnold. His father was abusive and alcoholic and openly favored Meinhard over Arnold. He would mock Arnold’s goal of being a bodybuilder. Arnold competed in many sports and was in excellent physical shape even before beginning his bodybuilding career.

During Arnold Schwarzenegger's youth, he would spend time watching movies. He confesses to idolizing the big screen bodybuilding stars at the time; especially Steve Reeves, Johhny Weissmuller, and Reg Park. He has said that he doesn’t remember how old he was when he saw his first movie in a theater but he knows it was a John Wayne movie. From his early teens, Arnold would tell people that he was going to be a famous movie star.  People who knew him best say he has always been very driven to succeed.

Arnold started bodybuilding after being introduced to weightlifting by a soccer coach when he was 13. By 14 years old he had decided to make a career out of it. He would exercise every day. In 1961 he met the former Mr. Austria, Kurt Marnul. Kurt was so impressed by Arnold that he invited him to work out in his gym in Graz. Arnold was so dedicated that he would even break into the gym on the weekends to work out because the gym was closed.

When Arnold Schwarzenegger was 18 years old (in 1965), he completed his required year of service in the Austrian Army. While he was in the Army, he competed in and won the Junior Mr. Europe competition. He went away from basic training to compete, and this action landed him in military prison for a week. He won a second bodybuilding competition in Graz during this time and was also voted the Best Built Man in Europe. This earned him a measure of fame.

In 1966, Arnold Schwarzenegger competed for the first time in the Mr. Universe competition. He came in second after Chester Yarnton, an American. His participation in the competition had the effect of introducing him to people who would be instrumental in helping him along his rise to the pinnacle of the bodybuilding world.  One of those people was Charles (Wag) Bennett, a judge in the competition.

He was so impressed with Arnold that he offered to train him at his gym in London. He even allowed Arnold to live with his family because young Schwarzenegger didn’t have much money for training and living expenses. Wag also helped Arnold improve his English speaking skills. During this time, Arnold also had the chance to meet his idol, Reg Parks. The two became friends, and Reg mentored Arnold.

In 1967 Arnold Schwarzenegger won his first Mr. Universe title. At 20 years, he was the youngest person ever to do so. He eventually went on to win five Mr. Universe titles, at one time even defeating Reg Park in competition.

In 1968, at the age of 21, Arnold realized a lifelong dream and moved to the United States of America. He continued his bodybuilding career under the training of Joe Weider. Arnold trained at Gold’s Gym in Venice Beach, CA. it is said that the iconic logo first used by Gold’s Gym was based on Schwarzenegger’s physique.

In 1973, Arnold Schwarzenegger won the Mr. Olympia title. At the age of 23, he was the youngest person ever to hold that record. He eventually went on to win seven total Mr. Olympia titles, a record that was unbroken until 1991.

During the time of his life when bodybuilding was his primary focus, Arnold Schwarzenegger would still take time to work in movies. His first role ever was in a low budget movie called Hercules in New York. He acted in the film, but they dubbed over his voice for the final cut because his accent was thick. He next appeared in the movie The Long Goodbye (1973) as a deaf and mute hitman for the mob. His roles started to become more significant after this.

Arnold Schwarzenegger's first break out role was in the 1976 production of Stay Hungry, for which he earned the Golden Globe award for New Male Star of the Year. In 1977, Arnold starred in the partially dramatized documentary Pumping Iron which followed his training and competition in the 1975 Mr. Olympia contest.

Over the next several years, Arnold appeared in more television shows and Hollywood films. It was in 1982, with the release of Conan the Barbarian, that Arnold’s place as an action star was cemented. This movie showcased his increasing English proficiency, decreasing accent, and famous physique. It was a box office hit and launched Arnold's movie career in earnest.

After retiring from Body Building and pursuing acting as a full-time career, Arnold Schwarzenegger has been in scores of films. He was a mainstay of the 1980’s and 1990’s action/comedy movies. Some of the most notable movies are both movies in the Conan series (Conan the Barbarian and Conan the Destroyer), the first Predator movie (1987), Red Sonja (1985), Commando (1985), True Lies (1994), Twins (1988), Total Recall (1990), and the Terminator Series (five movies so far).

Arnold took a partial break from acting from 2003 through 2011 during his tenure as the Governor of California.

Arnold Schwarzenegger ran for and won the role of Governor of the State of California in 2003 during a special recall election for the Governor, Gray Davis.  Arnold is a Republican and has been since he moved to the USA. In 2006, he easily won re-election in the gubernatorial race for California and served until 2011 when term limits made him ineligible to run for re-election.

In 2011, Arnold and Maria separated and eventually divorced when it came to light that he had carried on an affair and fathered a son with the couple's housekeeper of twenty years, Mildred Patricia Baena. Their son, Joseph Baena was born October 2, 1997. Since the split, actress Brigitte Nielsen has come forward and written about an affair that she carried on with Arnold during the filming of Red Sonja which they co-starred in. Arnold was dating and living with Maria at the time.

Arnold Schwarzenegger continues to act and be involved in television. He just completed a full season of Celebrity Apprentice but has opted to not come back for a second season.