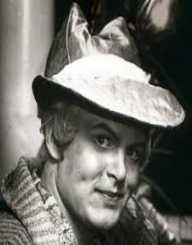 Leigh Bowery was an Australian performance artist and fashion designer.

Leigh Bowery was born in the suburbs of the city of Melbourne, Australia, on March 26, 1961. He studied music, and he took some fashion classes.

Leigh Bowery moved to London when he was nineteen years old. He quickly became known in the club scene and artistic circles. He attracted a lot of attention with the wild outfits he wore. He worked as a club promoter. He started a series of parties called Taboo. In 1985, he opened up his club with the same name. It became very popular and trendy, with long lines of people wanting to get in. It was known for the use of drugs, the wild atmosphere, and the unusual music.

Bowery became a performance artist in 1988. His first appearance was at the Anthony D’Offay Gallery. He showcased a bizarre act with outlandish costumes. That same year, he met the painter Lucian Freud. He became his muse, and he served as a model for a number of his paintings. Many of them were shown at an exhibit at the Metropolitan Museum of Art in New York City.

Leigh Bowery was also a fashion designer. His collections and runway shows were shown in London, Tokyo, and New York City. He was the costume designer for the dance company of the Scottish choreographer Michael Clark. He won a Bessie Award for his work.

Bowery formed a band called Minty in 1993 with several of his friends. They performed at the Freedom Café, but the city council quickly shut them down. Years later, a spinoff band called The Offset was formed.

Leigh Bowery always declared himself as a homosexual. Still, in May 1994, he married his longtime female friend Nicola Bateman.

Leigh Bowery died of AIDS on December 31, 1994, in a hospital in London. His body was flown back to Australia.

Bowery inspired plenty of artists and fashion designers, such as Alexander McQueen, Vivienne Westwood, Boy George, David La Chapelle, and many others. He also served as an influence for a new direction in the drag movement. Characters based on him appeared in the sitcom Spaced and the series Noel Fielding’s Luxury Comedy.