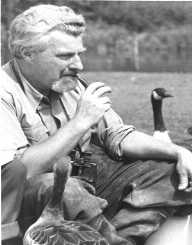 Konrad Lorenz was a Nobel Laureate Austrian scientist, who specialized in Zoology, Ornithology and above all Ethology. Ethology is the study of animal behaviour, and Konrad is regarded as the Founding Father of Ethology. He shared the Nobel Prize for Physiology or Medicine in 1973 with fellow animal behaviourist Karl Von Frisch and Nikolaas Tinbergen.

Konrad Zacharias Lorenz was born on November 7, 1903, in the Austrian capital city of Vienna. His father Adolf Lorenz was an orthopaedic surgeon. During Konrad’s childhood days he developed a keen interest in all kinds of animals including insects and birds and their behavioral pattern. His father was very supportive of his son’s such unusual and unpopular subject of interest.

Konrad Lorenz's boyhood excursions were his frequent source of procuring different species of animals, and he brought them to his home with alarming regularity. He had a stock of animals as diverse as fish, bird, dog, monkey, cat, and rabbits in his possession. By the time he turned a teenager, he had started providing nursing care to the animals of a nearby zoo, Schönbrunner Zoo. He also kept a diary and recorded detailed observations of bird behaviour in it.

In 1922, following his father’s wish, Konrad Lorenz went to the Columbia University in New York City to study Medicine after graduating from secondary school. He studied for two semesters there. After that, he came back to Vienna and continued to pursue the study of Medicine at the University of Vienna. In 1928, he graduated as Doctor of Medicine (M.D.) and in 1933 he was awarded a Ph.D. in Zoology. Meanwhile, in 1927, he published his detailed observations of a jackdaw in the prestigious journal of ornithology, ‘für Ornithologie.’

Konrad Lorenz was appointed as an Assistant Professor in the Institute of Anatomy immediately after his graduation and continued to teach there until 1935. In 1936, the German Society for Animal Psychology was founded. The following year Konrad assumed the position of coeditor-in-chief of the new ‘Zeitschrift für Tierpsychologie,’ which eventually became a prime journal for ethology. He continued his pursuit of studying animal behavioral pattern and kept many animals in his home for that purpose.

In 1937, Konrad Lorenz was taken in as Lecturer in comparative anatomy and animal psychology at the University of Vienna. He served as the Professor and Head of the Department of General Psychology at the Albertus University at Königsberg, Germany (now Kaliningrad, Russia) from 1940 to 1942. But his stint at the Albertus University at Königsberg was very short. He was drafted into the German Army as a Psychologist the very next year.

In 1944, Konrad Lorenz was sent to the Russian Front. In no time he was captured by the Russians and had to spend four years as their Prisoner of War. Though he was in captivity between 1944 to 1948, Russians did allow him to be on his own. So, during his PoW days, Konrad continued with his research and writing work while serving the Russians in the capacity of a doctor. He had even developed quite a friendly relationship with some fellow Russian doctors.

After the War, Russians repatriated Konrad Lorenz. He arrived at Altenberg, his family home near Vienna. He was allowed to keep and carry the manuscript, he was writing all these days, to be taken back to his home. Even his pet Starling was allowed to accompany him. This manuscript was later published in the name of his 1973 book ‘Behind The Mirror.’

After returning to Austria in 1948, Konrad Lorenz was made the Head of the Institute of Comparative Ethology, Altenberg, where he served from 1949 to 1951. In 1950, he established a comparative ethology department in the Max Planck Institute of Buldern, Westphalia, Germany and in 1954 became the co-director of the institute. He also served The Max Planck Institute for behavioral physiology, Seewiesen as its’ Director between 1961 to 1973. In 1969, Lorenz became the first recipient of the ‘Prix Mondial Cino Del Duca.’

In 1973, Konrad Lorenz shared the Nobel Prize in Physiology or Medicine for discoveries in individual and social behavior patterns with two other fellow pioneer ethologists, Karl Von Frisch and Nikolaas Tinbergen. In the same year, Konrad became Director of the Department of Animal Sociology at the Institute for Comparative Ethology of the Austrian Academy of Sciences in Altenberg.

Dealing with the behavioral pattern of the human beings as a social animal, Konrad Lorenz came out with his most famous book ‘On Aggression in 1963’. In this book, Konrad argued that if human beings are provided with the right environment, surrounding them while growing up, the generally aggressive nature of the human beings could be controlled to a considerable extent.

‘Behind the Mirror: A Search for the Natural History of Human Knowledge’ was published in 1973. The book went on to become the most authoritative text on human behaviour and is very popular among the students of the subject.

In 1969, The ‘Kalinga Foundation Trust’ in India awarded the learned scientist with the ‘Kalinga Prize.’ The prize was given in recognition of his contribution in comprehending science quickly to the ordinary people.

His most famous achievement came in 1973 when he shared the Nobel Prize for Medicine with two fellow ethologists.

Konrad Lorenz was married to Margarethe Gebhardt since 1927. They had three children. Among them, two are daughters and one son.

He died on February 27, 1989, due to kidney failure in Vienna, Austria. He was a pioneer in behavioral science, and his findings are taught throughout the renowned universities of the world.