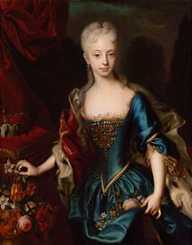 Maria Theresa was the Archduchess of Austria, Holy Roman Empress of Habsburg dynasty, and queen of Hungary and Bohemia. She was also Queen Consort of Germany from 1745 to 1765.

Maria Theresa Walburga Amalia Christina was born on 13th May 1717. She was the oldest surviving daughter of Holy Roman Emperor Charles VI and Elisabeth Christine of Brunswick-Wolfenbüttel. She was born in at the Hofburg Palace, Vienna.

Before her birth in 1711, her father Charles VI changed the Salic Law, which prohibited a woman from ruling to Pragmatic Sanction.

When the sanction was issued in 1713 after Charles had to fight in two wars to secure the Sanction. On her birth, Maria Theresa was heir presumptive until a son was born.

Maria Theresa was allowed to attend council meetings when she was fourteen. Before that, her education was overseen by the Jesuits, and her governess Countess Marie Karoline von Fuchs- Mollard taught her etiquette.

Marie Theresa was raised to be a queen consort, focusing on drawing, painting, music, and dancing.

The princess was first engaged to be married to Leopold Clement of Lorraine, but he died in 1723 of smallpox.two years later, In 1725, she was betrothed to Charles of Spain while her sister, Maria Anna, was engaged to Philip of Spain.

Due to external pressures, Charles VI had to renounce the engagement.

In October of 1740, Charles VI died, leaving Maria Theresa a poor country in the state of war. Maria Theresa was twenty-three years old when she ascended to the throne. Although her crown lands: the Austrian duchies, Netherlands, Bohemia and Hungary accepted her accession.

The other European powers resisted despite agreeing to the Pragmatic Sanction previously.  Maria Theresa’s first display as queen was the formal act of homage of the Lower Austrian Estates to her.

The act was an elaborate public event to recognize and legitimize her accession formally.

The oath of fealty was taken on the same day in Hofburg. A day before, Maria Theresa made her husband, Francis Stephen, co-ruler of the Austrian and Bohemian lands.

The first to break sanction and attack was Frederick II, King of Prussia, which started an eight-year War of the Austrian Succession. Frederick II invaded Silesia and claimed it for his own. Bavaria and France followed suit.

The war ended in 1748, with The Treaty of Aachen, where Maria Theresa ceded Prussia’s possession of Silesia and Duchy of Parma to Philip of Spain. Even Though France had successfully conquered the Austrian Netherlands, it was returned to Maria Theresa by Louis XV.

Unwilling to leave Silesia with Prussia, Maria Theresa secured an alliance with France and Russia, planning to attack Prussia to regain her duchy.

But Frederick II did the preemptive attack and started the Seven Year’s War. In 1763, Maria Theresa signed the Treaty of Hubertusberg, although France was forced to relinquish most of the American colonies, Austria had to recognize Prussian’s possession of Silesia.

Her youngest daughter, Maria Antonia married Louis, Dauphin of France by proxy in Vienna in April 1770. She was the famous Marie Antoinette.

The empress mourned the death of her husband until her death on November 29, 1780. Her reigned spanned forty years, bringing Austria from state of bankruptcy to a modernized state.

Maria Theresa son, Joseph, already succeeded her as Emperor. The Empress was buried in the Imperial Crypt in Vienna next to her husband.

Maria Theresa modernized the empire by attempted to tax clergy and nobility, to pay for a standing army of 108,000 men.

Maria Theresa personally oversaw the unification of the Austrian and Bohemian chancellories in May 1749. In 1760, she created the council of state, composed of a group of people who provided advice, but lacked executive or legislative authority.

Through her efforts, Maria Theresa managed to double state revenue for ten years since 1754. Additionally, she centralized her government system by creating a General Directory.

Following the death of her sister Archduchess Maria Anna, she employed Gerard van Swieten to start the Vienna General Hospital. He also was in charge of her health, and the revamping of Austria’s educational system.

Through him, Maria Theresa made a decree that autopsies would be mandatory for all hospital deaths in the city of Graz, the law is still in effect today, and resulted in one of the most important and complete autopsy records in the world.

In 1767, she promoted inoculation by vaccinating her children after the smallpox epidemic. Maria Theresa also banned the creation of new burial grounds without government permission to counter hygiene and waste problems.

Maria Theresa most famous reform was her education. In 1775, she based her education policies based on Prussian’s. In the new school system, both genders from age six were required to attend school until twelve years of age.

The reforms were not successful as there were no funding from the state. Maria Theresa also permitted non-Catholics to attend university.

Introduction of secular subjects marked the decline of-of theology as the main foundation of university education.