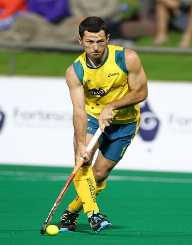 Jamie Dwyer was born on March 12th, 1979 in Rockhampton, Queensland in Australia. He is famous for being an Australian hockey player. He is regarded as one of the world’s best players in hockey. He has several gold medals under his name including World Cup gold, Commonwealth gold, and Olympic gold. During his career as a player, he was bestowed with the award for World Hockey Player of the Year for six times. This is an award that he took home from 2004 -2011. Therefore, with such a record in playing hockey, he stands as one of the best hockey players today.

Jamie Dwyer was born on March 12th, in 1979. He has a nickname Foetus that his friends call him. Dwyer began developing a special interest in hockey right from the time he was young. This was attributed to the fact that his parents also played the game. When he was four years old, he was introduced to hockey. The love for the game runs in the family as Matthew Gohdes; his cousin also plays as a professional hockey player. Together, they are normally featured in the Australian national hockey team. Dwyer’s personal life also revolves around hockey as he crossed paths with his future wife while playing the game in the Netherlands.

Growing up loving hockey, there was a time when Dwyer was at crossroads. This occurred when he was 15 years old. He had been given a cricket scholarship. The scholarship required him to shift from Brisbane, and this also implied that he would have to quit playing hockey. Following his dreams, Dwyer chose to turn down the scholarship and pursue where his passion lied; playing hockey.

Jamie Dwyer completed his high school education at the age of 17 and decided to chase his dream of one day competing at the Olympic Games. He moved to Brisbane where he began playing with the Queensland Blades hockey team. In 1999, Dwyer earned a spot at the Hockey Australian Institute of Sports. Sadly, he never managed to be included as part of the team that would compete at the Sydney Olympics in 2000. Nonetheless, he was later included as part of the national team from there henceforth.

The following year, Dwyer made his first international appearance for his national team. He proved to be a great asset to the team and was given an opportunity to pick his ideal jersey number. Dwyer’s mentality was to always surface as the best player ever. Consequently, he settled for the number 1 jersey. In 2002, he gained the recognition of being the Young Player of the Year. This was after his remarkable performance during the season. He had scored 24 goals in all the 34 matches that he had featured in.

Still, in 2002, Dwyer played for his national team during the World Cup after which they went home with a silver medal. They performed better at the Commonwealth Games and won a gold medal. In 2003, the Australian national team competed at the Champions Trophy competition and was ranked as second best. Unfortunately for Dwyer, he incurred a knee injury in the process of helping his team. This had a major impact on the Athens Olympics that he was to compete in the following year. While still in the process of recovering, Dwyer is remembered for scoring the winning goal at the 2004 Olympics which helped his team take home the gold medal. Besides the gold, he was awarded for being the world’s best player. In 2005, his team also bagged home a gold medal at the Champions Trophy competition.

In 2006, the team underperformed as they only won a silver medal during the World Cup competitions. The Champions Trophy tournament also portrayed their dismal performance as they were fourth placed during the same year. The Commonwealth Games rekindled their fighting spirits as they won gold.

In 2008, Dwyer’s team again won the gold medal at Champions Trophy. The Olympics were somehow tough as Dwyer had suffered a hip injury. This led to their loss, and they only managed to take home a bronze medal.

Jamie Dwyer is married to a hockey player named Leoni. She met her during one of his competitions in the Netherlands. Together they are proud parents of two sons.