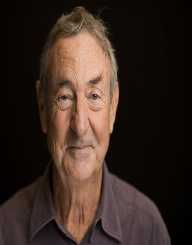 Nicholas Berkeley Mason is an English drummer and a founding member of the progressive rock group Pink Floyd. Born on January 27, 1944, she is the only member of the band to feature on all their albums.

He is also the only member who has remained in the band since its inception in 1965. He co-wrote popular songs of the band including “Time” and “Echoes.” The Pink Floyd band is estimated to have sold over 250 million records worldwide. Mason was awarded an Honorary Doctor of Letter by the University of Westminster on November 26, 2012.

Nick Mason was born on January 1944 in Birmingham to documentary filmmaker Bill Mason. He was raised in Hampstead, London. He received education at Hall School, Hampstead and later at Frensham Heights School.

He enrolled at the Regent Street Polytechnic (now University of Westminster). While there, he made friends with Richard Wright, Bob Klose, and Roger Waters and that resulted in the formation of the band Sigma 6.

Mason’s drumming style is heavily influenced by big band music and jazz and was therefore drawn to acoustic drums. The sound from his play was devoid of the harsh demarcation of beats 2 and 4 to the fatter and gentler tone.

Nick Mason also adopted a laid back and gentler approach of drumming contrary to that of other progressive rock drummers of the time. The band Sigma 6 later metamorphosed to Pink Floyd and Mason has been the drummer on every album of the band since its formation. Other members included Roger Waters, Syd Barret, David Gilmour, Bob Klose, and Richard Wright.

Mason was the sole composer of the band’s songs like “The Grand Vizier’s Garden Party 1-3 and “Speak to Me.” He is the namesake of the band’s one-off song “Nick’s Boogie.” As the drummer of Pink Floyd, Mason hardly played any vocal part except for few spoken lines in songs like

One of These Days (Corporal Clegg album), Signs of Life, and Learning to Fly. Water left the band in 1985, and for about seven years, there were litigations over the ownership of the name “Pink Floyd.” Water wanted to dissolve the band or prevent the name from being used by the other members. Mason and Waters later patched their differences.

On 12 August 2012, Nick Mason performed at the closing ceremony of the 2012 Olympic Games. He has worked with other musicians like The Damned, Robert Wyatt, Steve Hillage, Michael Mantler and Gong.

He formed the band Nick Mason’s Saucerful of Secrets, on April 17, 2018. Members of the band include David Gilmour, Lee Harris, Guy Pratt, Gary Kemp, and Dom Beken. In May the five-member band performed in four shows in China.

Aside from music, Mason is a car and motor racing enthusiast. His love for the sport was documented in the short film Could Be a Dream released in 1986. Through his company Ten Tenths, he owns several classic cars.

He has also competed at the 24 Hours of Le Mans. As a collector of classic cars, Mason owns racing cars including Alfa Romeo 8C, Ferrari 250 LM, Ferrari BB LM, Bentley 4½ Litre,  Bugatti Type, Jaguar D-Type, McLaren F1 GTR and Maserati Tipo.  He is more attracted to Ferrari cars according to estimations; he has owned about 40 of those cars.

Nick Mason married woodwind player, Lindy Rutter and had two daughters Holly and Chloe. They divorced in 1980. Mason then married actress Nettie, with whom he has two sons Cary and Guy.

He is a licensed pilot and flies an Aerospatiale AS 350 Squirrel helicopter. He released the book Inside Out: A Personal History of Pink Floyd in October 2004. It also comes in a 3-CD audiobook. Nick Mason is an atheist.