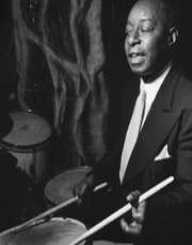 When he was in his early 20s, Babatunde Olatunji found out about Rotary International’s scholarship program. He immediately applied and was accepted. He went to Morehouse College in Atlanta, Georgia, in the US.

After graduating from Morehouse College, Babatunde Olatunji enrolled at New York University. He was studying public administration and began a percussion group on the side to earn money while he studied.

Babatunde Olatunji had to abandon his studies due to lack of finances, but the music was playing a larger and larger place in his life. He began to perform concerts, and his percussion group also played at civil rights rallies which were a predominant civilian issue at the time.

He returned to Africa in the late 1950s to attend the All African People’s Conference. Babatunde Olatunji had ambitions of becoming a diplomat, but at the conference, the leader of Ghana, Kwame Nkrumah, asked Olatunji to become a devotee of teaching African culture to the world.

Later that same year, Olatunji took a job as a drummer in a dance production called African Fantasy. He was seen by John Hammond, who was a talent scout for Columbia Records A&R. He was signed to Columbia in 1957, and the first of his albums was released two years later.

As well as making his albums, Babatunde Olatunji also composed music for a Broadway production, and a Hollywood movie.

Babatunde Olatunji was politically active, and before each live performance, he would make a speech for social justice. He was with Martin Luther King Jr when the former marched to Washington.

He was also a talented music teacher, and in the late 1950s, Babatunde Olatunji started teaching drum and dance workshops. His workshops were presented not only in the US, but around the world, at colleges, universities, and for cultural and government organizations.

Between 1959 and 2005, Babatunde Olatunji released 17 albums and four videos.

His autobiography, The Beat of My Drum: An Autobiography, was released in 2005, with a foreword by Joan Baez.