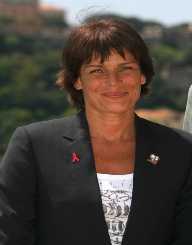 Princess Stephanie of Monaco was born on the 1 February 1965 in Monaco. She parents were Princess Grace, formerly known as Grace Kelly, and Prince Rainier of Monaco. She has an older sister Caroline and a brother Albert. Stephanie Grimaldi was seventeen in September 1982 when the car her mother was driving crashed on a winding stretch of road. Princess Grace was killed instantly, and Stephanie was left with minor injuries. When Prince Rainier died in 2008, he had ruled the Principality of Monaco for fifty-six year. Stephanie’s brother Albert succeeded Prince Rainier.

Stephanie Grimaldi attended the Dames de Saint-Maur school in Monaco, followed by further education at the Dupanloup, Paris, graduating in 1982.

After her recovery from the 1982 motor accident, Stephanie Grimaldi took up an apprenticeship working with Marc Bohan. She also took up modeling and appeared on the cover of various fashion magazines including Vogue and Vanity Fair.

In 1986, Stephanie Grimaldi launched a swimwear label in 1986, Pool Position. She had developed the range working with Alix de la Comble. She also had perfume, Stephanie, named after her.

As well as fashion, Stephanie Grimaldi was involved in the music business. In 1986, her single Ouragan came out. She also released an English version, Irresistible. Both sold well. She then recorded an album Besoin which sold over 1.5 million copies sold. Two singles Flash and One Love To Give sold. When Stephanie released her second album in 1991, it did not live up to expectations.

Her final musical venture was singing In The Closet with Michael Jackson, on his Dangerous album.

Princess was seventeen old in 1982 when Stephanie Grimaldi was traveling with her mother Princess Grace, and the car crashed, killing Grace outright. Princess Stephanie did not speak publicly about the incident for over twenty years but later said that it was a shocking event that haunted her. She denied the rumors that she had been the one at the wheel.

As a young woman, she had a series of well-publicised relationships including racing driver Paul Belmondo, actor Rob Lowe and her former bodyguard Daniel Ducruet. Her father Prince Rainier was concerned about her choice of boyfriends, but they later reconciled.

Daniel Ducruet and Stephanie Grimaldi had two children together, Louis (1992) and Pauline (1994) They then got married in 1995, but the marriage only lasted eighteen months. Stephanie had a third child in 1998, she remained quiet about who the father was, but reports at the time claimed that it was Jean-Raymond Gottlieb, a bodyguard. Stephanie then had a relationship with Franco Knie, an elephant trainer. She moved her family to Switzerland, and for awhile they lived in a circus caravan. After a time, Stephanie returned to Monaco with her three children and married circus performer Adans Lopez Peres, but the marriage did not last very long.

Stephanie Grimaldi was brought up a Roman Catholic.

Stephanie Grimaldi has been involved with Fight AIDS Monaco since 2003. She has been an ambassador for the Joint United Nations Program on HIV/AIDS. In 2016, she released a single as part of FIGHT AIDS.

When Stephanie Grimaldi was young, her choices of partners caused much speculation in the tabloids.

After the motor accident in 1982 which killed her mother, Princess Grace of Monaco, there was a lot of speculation that Stephanie had in fact been driving. Authorities denied this, and later, in two interviews Stephanie categorically denied it herself.