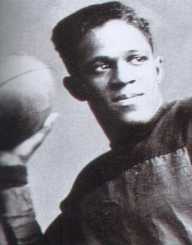 American football player and coach Fritz Pollard was born Frederick Douglass Pollard on the 27 January 1894 in Chicago. His mother, Catherine Amanda Hughs, was  Native American and his father, John Willliam Pollard, was an African-American.

Fritz Pollard graduated from Lane Tech High School. During his time at high school, he showed athletic ability as track champion, a baseball and football player. In 1915, he enrolled at Brown University after being awarded a Rockefeller scholarship.

Fritz Pollard was the first African-American to play in the Rose Bowl (1915) He also had the distinction of being the second African-American college football player to be named an All-American. In 1916, Pollard was instrumental in taking Brown to back-to-back wins over Yale University and Harvard University.

Initially, after graduating from Brown University, Fritz Pollard studied briefly towards a degree in dentistry. During World War I, he enlisted and worked as a director of a U.S. Army YMCA. Later, he coached football at Lincoln University. Pollard joined the Ohio Akron Pros in 1919. In 1920,  the Akron Pros became part of the American Professional Football Association, which was renamed the National Football League in 1922.

After his retirement from football, Fritz Pollard went on to become involved in music production, business consulting and also published a newspaper, the New York Independent News.

Fritz Pollard married Ada Laing in 1914. They had four children, a son, and three daughters.