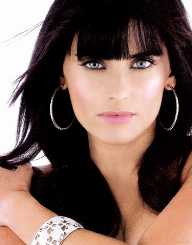 Nelly Furtado was born on December 2, 1978, in Victoria, Canada. Her parents are Maria Manuela and Antonio Furtado. She also has a sister named Lisa.

As a teenager, Nelly Furtado attended the Mount Douglas Secondary School. While there, she practiced singing and playing instruments in her school band. She later graduated from this school in 1996.

In the late 1990’s, Nelly Furtado began her professional music career. She was performed on one album with the music group Join the Ranks. She was also a member of the duo Nelstar, but she soon left this band to pursue a solo singing career. She was able to do so because she had been “noticed” at a talent competition in Toronto.

In 2000, Nelly Furtado signed on with DreamWorks records to produce her first album Whoa, Nelly! In the same year. The musician, Gerald Eaton (of the Philosopher Kings), also worked on this album with her. This album was extremely popular, reaching #2 on the charts in both Canada and the UK. The album also reached Platinum status and sold over 9,000,000 records worldwide.

The success of her first album encouraged her to make a second, Folklore, in 2003. This album was successful, but not as successful as her first. The highest it ever made it on the charts was to #4 (in Germany). The record still went platinum, selling more than 3,000,000 records worldwide.

Her third album, Loose, was released in 2006. By this time, Nelly Furtado was working with Mosley Records instead of DreamWorks. This album was her most successful yet, reaching #1 in Canada, Austria, Germany, New Zealand, and the United States. This album went platinum, selling more than 12,000,000 records worldwide.

Her fourth album, Mi Plan, was released in 2009 on Universal Latino Records and with Furtado’s own record company, Nelstar Records. This album was her least successful so far. While the record did manage to go platinum and reach #3 on the charts in Switzerland, it did not do as well in Canada and the United States.

Her next album, The Spirit Indestructible, was released in 2012 with Mosley Records. This record did even worse than her last one. While the record still reached #3 in Switzerland, it did not even make it in the top 50 in the United States. The album has yet to reach any platinum status.

Nelly Furtado’s most recent album, The Ride, was released in March 2017 with Nelstar Records. This is her worst ranking album to date, ranking #41 in the charts (at its highest point in Switzerland, and not even making it in the top 50 in Canada.

Over the course of her career spanning more than a decade, Nelly Furtado has won over 50 awards and has been nominated for more than 100 more. Some of her most impressive awards are listed below.

Nelly Furtado had her first child, Nevis Gahunia, with her now ex-boyfriend Jasper Gahunia, in 2003. She later married Demacio Castellon in 2008.