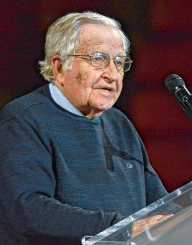 Avram Noam Chomsky is an American Scholar who has contributed immensely to linguistics, philosophy and is also known for his controversial critique of political systems. He is a critic, linguist, political activist, philosopher, historian, a cognitive scientist. He is a role model for scholars and has authored hundreds of books. Let us delve a bit into the world of this world acclaimed scholar.

Noam Chomsky and his brother David were brought up according to Jewish standards, and they faced anti-Semitism from communities in their Philadelphia neighborhood. While at Oak Lane Country Day school, Chomsky was encouraged to develop his interests and ideas through self-actualization At the age of ten, he wrote an article that focused on the rise of fascism in Europe after the fall of Barcelona in the Spanish Civil war. He had his secondary education at Central High school. There, he was an active member of several clubs and societies.

Chomsky was a very bright lad and excelled in his academic pursuit. He also attended the Hebrew High school at Gratz College during this time. At thirteen years of age, he began to visit New York city alone, spending time in his uncle's newspaper stand and reading as many books as he could. There he met with the Jewish working class community and joined in their discussion. These discussions influenced his political views. He was also greatly influenced by his uncle who saw him as someone who was very much aware of the happenings around him even with his little education.

Noam Chomsky attended the University of Pennsylvania at the age of sixteen and undertook a general programme of study, taking courses on logic, philosophy, and language. He funded his university education by teaching Hebrew. He, however, would consider quitting school as he did not enjoy his experiences which were frustrating for him. His mind, however, changed after he met Zellig S. Harris, who reinvigorated his interest in education. It was Harris, a Russian born linguist, who introduced Chomsky to the field of theoretical Linguistics, and he never looked back. He went ahead and received his Bachelor and Masters Degrees.

Harris also introduced Noam Chomsky to Nathan Fine, a Harvard Mathematician, as well as Nelson Goodman and W.V. Quine. Chomsky had differing views with Goodman on the human mind and language. Chomsky later applied to Harvard University due to Goodman's encouragement and heavily due to the presence of Quine at Harvard. He was named as a member of the Society of Fellows at Harvard between the years 1951 to 1955.

Noam Chomsky joined the Massachusetts Institute of Technology (MIT) in 1955. He served in the Department of Linguistics and Philosophy for fifty years. He also lectured in Cambridge, UCLA, Princeton and Columbia Universities. His revolutionary teachings saw him introduce the concept of Transformational Grammar into Linguistics. He also proposed famous theories on language that revolutionized behavioral thinking and language learning.

Noam Chomsky also introduced the Chomsky Hierarchy, which divides grammar into groups depending on the expressive abilities of such grammar. His ideas, theories, and teachings have given solutions and also raised new questions about the nature of humans and their information processing capabilities. Some of Chomsky's famous works include Current Issues in Linguistic Theory (1964), Aspects of the Theory Syntax (1965), Language and Mind (1972) to list just but a few.

Noam Chomsky never shied away from speaking his mind about political issues. His comments are almost always radical and controversial but honest in their assessment. He vehemently opposed the United State Government for the Vietnam war, and this placed him on President Richard Nixon's Enemy list. He is never scared of making his feelings known and found himself in troubled waters in 1979 when he signed a petition that supported the free speech rights of Robert Faurisson, who at that time denied the existence of gas chambers in concentration camps belonging to the Nazi.

Noam Chomsky felt not signing the petition would go against his stance against the imposition of free speech, and did not mind that in so doing, he would be aiding a Nazi leader, as he didn't support the Nazis. This action put Nazi in a bad light, especially among the French. He, however, stated that he signed the petition only because he supported Faurisson's civil liberties and not because he defended his denial of the presence of gas chambers in Nazi camps. He has also courted controversy for his collection of essays on the 9/11 terrorist attacks. He has a lot of writings on politics, with the latest being On Western Terrorism: From Hiroshima to Drone Warfare, which makes for an exciting read.

Noam Chomsky remains a very humble man despite the number of resources he has at his wherewithal. He enjoys reading newspapers and reads about four to five dailies each day. He remains non-religious despite his Jewish roots. He enjoys speaking to massive audiences and activist groups rather than attending academic conferences.  He is also known for the use of irony in his writings. His colleague, Steven Pink has said that Chomsky portrays those who disagree with his thinking as stupid or evil.

Chomsky married Carol Doris Schitz in the year 1949, and they remained married till her death in the year 2008. Together, they bore three children. He married Valeria Wasserman in the year 2014.

A radical thinker, Ideologist, Controversial, scholar, political dissident? Call him what you may, Chomsky holds an excellent legacy for his revolution of the Linguistic field and his tough stance against what he sees as wrong. He is a role model for scholars and political activists alike.