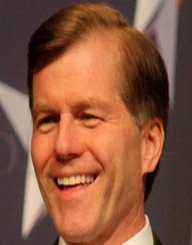 Bob McDonnell is a Republican and a former Virginia Governor. He hit the headline in 2017 after he and his wife faced a corruption charge in 2014. He was later sentenced to a two years imprisonment.

Bob McDonnell was born in Philadelphia on 15th June 1954. His father was a Lt. Col. John Francis McDonnell USAF Ret and mother Emma B. Meta. One year after McDonnell’s birth, his family moved to Fairfax County, Virginia. His father was later transferred to work in Germany as an army officer.

The family spent four years in Germany before returning to their hometown Virginia where they established a home in Fairfax County.

Bob McDonnell went to Bishop Ireton High School and graduated from the school in 1972. He later enrolled in the University of Notre Dame in Indiana where he studied on a scholarship. He graduated with a degree in Management in 1976.  Four years after his degree he enrolled for an M.B.A at Boston University.

Immediately after graduating from the university Bob McDonnell got a job in the United States Army as a medical supply officer where he served in the position for four years.

He was posted to a military post in Germany for three years and later to Virginia for two years. In 1981, he left active duty in the army to enroll in a program of public policy.

Bob McDonnell ran for State Legislature seat for the first time in 1990, he emerged as the winner and was representing Virginia Beach area. His term in office saw a significant change in the running of the capital. His tough stand on crime, gang activities, and sexuality based offences saw a substantial decline in crime.

In 2005, McDonnell set his eyes on the State Attorney Job. In a closely contested seat, he won beating his closest competitor Creigh Deeds. Among his significant reforms in the justice system, he introduced a 25 years sentence for cases of sexual assault against children.

Bob McDonnell stepped down his post as State Attorney General to run for governor of Virginia in 2009. He comfortably won the seat. During his campaigns, his priority was to reform the education sector of Virginia State. His tenure as a governor saw a lot of reforms.

At the beginning of his term, two of his appointments drew a lot of criticism from the Democrat legislatures. Fred Malek had a misconduct case against him in his previous employment.

As the governor, he delivered a response to President Obama's address in the state of the Union address on behalf of the Republicans in Virginia House of Delegates.

Bob McDonnell and his wife were called to answer on corruption charges against them on 21st January 2014 in connection to gifts received from donors to further his campaigns.

He became the first governor of Virginia to be charged while still in office. McDonnell and his wife were found guilty of the charges on 4th September 2014. The case was however dropped on 8th September 2016 after a lot of court battles.

Bob McDonnell married his long-term girlfriend, Maureen in 1976. The two have five children together and are married to date. One of their daughters Jeanine is a former U.S. Army Officer who served in Iraq.